Name Jeff Bezos brings to mind several terms. Rich, innovative, and engineer are just a few of the first things people think of, along with a host of more negative words for some.

With all his obligations as one of the richest people on Earth, it’s easy to forget that Bezos has kids of his own. In fact, he and his ex-wife Mackenzie Scott have four children.

Being born to the second-richest person in the world, according to Forbes, certainly comes with its own set of perks, and the Bezos children have developed quite a lavish lifestyle with their father. 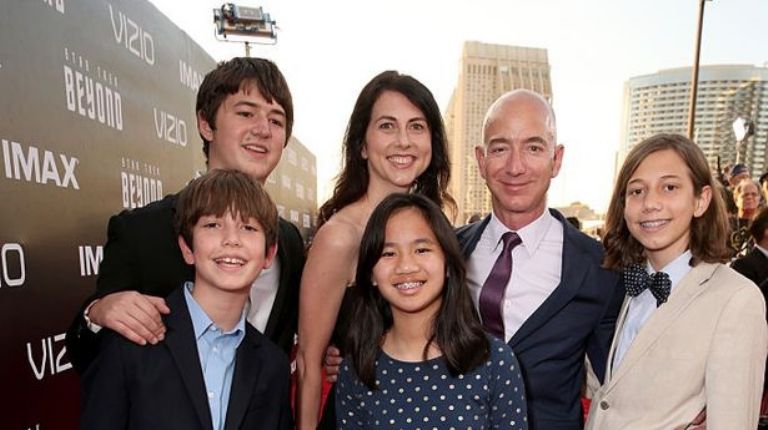 Bezos’s eldest son, Preston Bezos, born in 2000, lives a relatively public life and has occasionally appeared alongside his father. However, even searches on him redirect to his father, whose full name is Jeffrey Preston Bezos.

Details about the other three children, two other sons and an adopted daughter, are highly elusive. Even their names remain a mystery to the general public, as does almost any information about them beyond their gender.

Many have theorized that Bezos has used his influence to keep information about his younger children off the internet as much as he can. Megan Greenwell, a former Deadspin editor, said on Twitter that one of her students lives in the same dorm as one of Bezos’ children. When she tried to Google it, the search didn’t work.

Some have theorized that two young men Bezos tagged in a January 1 Instagram post could be his other children, but it seems unlikely that they are under further investigation.

Preston Bezos follows in his father’s footsteps in more than just name. According to The Sun, he also attends the same prestigious Ivy League school that his parents attended, Princeton University in New Jersey.

His main and expected graduation date and more remain a mystery.

The Bezos children already have more money than the vast majority of people can dream of thanks to their parents’ fortune. However, that number doesn’t even compare to the astronomical heritage they’ve lined up.

According to a video from Income focus detailing the lives of the Bezos children, each of the four children will inherit $50 billion from their father alone.

That’s just a conservative estimate, as it only takes into account Bezos’ current wealth and not the billions more he will inevitably earn over the rest of his life.

It also doesn’t take into account what they may receive from their mother, who reportedly received $38 billion from Bezos in their divorce.

It goes without saying that the Bezos children have nothing to fear when it comes to financial matters.

Even someone as successful as Jeff Bezos needs a break from time to time.

Thanks to his immense wealth, he can go all out when he decides to take a vacation, and the kids tag along.

In 2017, Bezos took his extended family, including his parents and siblings, to Rome to enjoy some much-needed time off. Then, in 2019, he had an entire group escort him and his new girlfriend Lauren Sanchez to St. Barth’s in the Caribbean aboard a massive yacht.

Bezos may be a businessman, but he knows how to celebrate when the moment calls for it, and his children are some of the biggest beneficiaries.

5. Jeff Bezos has reportedly bought properties for each of his children.

Bezos’s investment in his children’s future extends far beyond his inheritance money.

The Amazon founder spent $23 million on a former textile museum-turned-home in 2016. The home, located in the same neighborhood where former President Barack Obama once housed his family, covers 27,000 square feet and includes 10 bedrooms and eight full baths. .

Despite the massive purchase, Bezos does not live there full-time and instead remains at his Seattle residence, leading many to believe that he actually bought the house for his children to use in the future.

He also bought four apartments in the city of New York with view to Central Park in 2019 and 2020 for a total of $96 million.

The number of apartments matching the number of children she has fueled speculation that she once again shopped with her kids in mind.

6. Children can fly in their private jet.

There’s no better way to get around on vacation than on a private plane, and Bezos knows it.

The owner of the Washington Post reportedly spent $65 million on a private jet Gulfstream G650ER, the same one that his rival Elon Musk also owns. The aircraft seats 13 passengers in the main cabin and can travel between two world cities non-stop.

There is no greater flexibility for a child than to say that their parents have a private jet, and the Bezos children can say that and much more to their peers.