Behind the images that show the television host Aldo Miyashiro Kissing Fiorella Retiz, former reporter for “La Banda del Chino”, Érika Villalobos – still the wife of the TV presenter – received the unconditional support of her followers on social networks.

And it is that, unlike the protagonists of the ampay, Érika Villalobos decided not to block the comments section of her posts on Instagram, a social network where dozens of fans have sent her messages of support and admiration.

“Erika we are with you”, “Strength Érika you are a great woman that no negative comment knocks you down from this you come out strong for your children”, “Erika you do not deserve this, but you will get ahead”, “She does not have to block comments because she can come out with head held high”are some of the messages that the actress received on her social network.

As is known, just a few days ago Érika Villalobos and Aldo Miyashiro returned from a trip to Europe, where they went with their children. The celebrities have been married for more than 17 years; However, this could come to an end after the controversial infidelity of the presenter of “La Banda del Chino”.

The host Aldo Miyashiro and his former reporter Fiorella Retiz were captured by the cameras of the program “Magaly TV: La Firme” giving passionate kisses in the house of sports journalist Óscar del Portal.

The incident occurred during the early hours of April 19, at the home of the sports man located in San Isidro, where they went to celebrate after a game of the “Once Machos FC” team.

The ‘ampay’ of Aldo Miyashiro and Fiorella Retiz occurred after he and Érika Villalobos -his still wife and from whom some estrangement is unknown- returned from a trip through Europe that they made with their children.

But in addition to the actor, Óscar del Portal and Fiorella Méndez have also gained notoriety in this case. Pedro Loli’s ex-partner spent the night at the journalist’s house, whose wife is on vacation in Punta Cana. 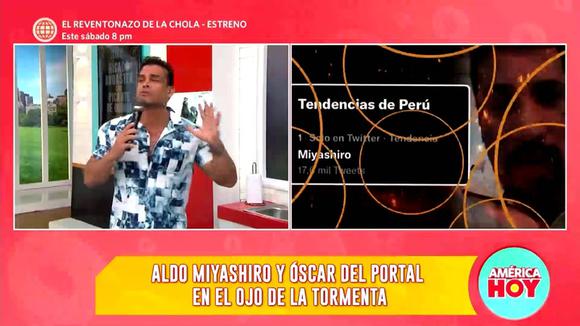 Singer was also outraged by ampay.