After the debate about the “right to be forgotten” that some figures on the public scene ask for so that their image does not continue to be linked to some embarrassing episode for life, Alejandra Maglietti allowed herself to take the subject with humor and asked her followers to delete a particular moment of his career.

The influencer turned to social networks to remember her time in the ElectroStars group, a proposal that she joined together with Victoria Vanucci, Dominique Pestaña and Ivana Paliotti. The comment of maglietti It came after a video of the band began to circulate again with the title as a joke “Lollapalooza”.

The initiative of the “right to be forgotten” was requested by Natalia de Negri, who asks Google through a judicial measure that her name not continue to be related to the armed criminal case against the former representative of Diego Maradona, Guillermo Coppola, in 1996. In this way, the complainant seeks to preserve his image appealing to the suppression of a part of his past that does not match his current profile.

The images of Alexandra Maglietti who returned to social networks as an irony, they show her along with the other members of the ElectroStars in a television show they gave at the Mary Terán de Weiss stadium, located in Parque Roca.

maglietti replied with humor the video in question and asked: “Right to be forgotten”. The influencer accompanied her request with a series of emojis of laughing faces. 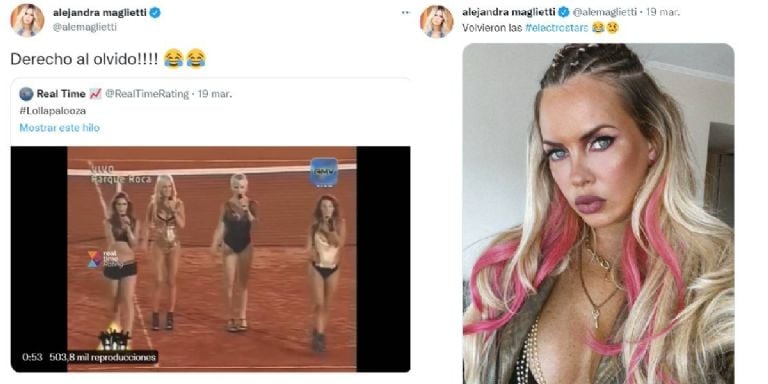 The tweet generated hundreds of comments from users who celebrated the occurrence of the blonde and they remembered that stage of their career. In fact, some asked Alejandra questions about that project and when they asked her, for example, why they sang in English, she had no qualms about answering: “Because that way the Auto-Tune was less noticeable (an audio processor to improve intonation)”.

Hours later, Alexandra Maglietti made it clear that his request for “doblivion“It’s as a joke and he looked again like in the days of the ElectroStars and shared the postcard.

Recently, the influencer revealed in Flor de equipo (Telefe), that in reality both she and her groupmates did not sing but only danced and lip-synced. In fact, when in the aforementioned program they asked her what her worst lie was, she acknowledged: “Make us sing with the ElectroStars. It wasn’t even our voice, it was all an arrangement. The idea was ours, we knew that we sang very badly, but a girl came who doubled our voices”.