Zully Pinchithe woman who inspired the creation of “Mi bebito fiu fiu” after being romantically linked to former president Martín Vizcarra, visited the set of “Amor y Fuego” this Thursday, June 7, and ended up starring in a tense moment with Rodrigo González and Gigi Miter.

“While you are here with us, my followers write to me and make some comments, I am going to read them to you: ‘Rodrigo. How she is not ashamed to walk through all the channels, she does not realize that everything came from her because she is her supposed lover. Doesn’t she realize that Vizcarra has children, she has a family?’” Rodrigo commented at the beginning.

Not satisfied with the response of the former candidate for Congress, Rodrigo insisted on asking Zully if she had had an affair with Martín Vizcarra.

The interview started to spiral out of control.

After that, Gigi Miter replied and asked if at any time he contacted Maribel Díaz, wife of Martín Vizcarra to clarify the matter; However, the lawyer assured that she “did not know the lady.”

The confrontations did not stop, until finally the Willax TV host decided to end the interview. “I think we’re done with this. Thank you for coming, it is impossible to manage a conversation with a person like you”, pointed out the popular ‘Peluchín’.

The confrontation on television began to resound loudly on social networks, where users did not miss the opportunity to harshly criticize Zully Pinchi and create funny memes. In addition, they highlighted the patience of Rodrigo and Gigi Miter during the interview.

Zully Pinchi every time her chats with Vizcarra mention her #amoryfuego pic.twitter.com/lEyUMABzJp

No one:
My mom: that lady has gotten a log, right? #amoryfuego pic.twitter.com/gvP7wD8G7X

#amoryfuego #MiBabyFiuFiu
I didn’t know someone more random than her HAHAHAHAHAHA what patience Rodrigo and Gigi have
I would have thrown it out a while ago pic.twitter.com/vlNXgqrmw1

Zully: “You must respect women”
Rodrigo and Gigi: “You respect Vizcarra’s wife” #amoryfuego
Take that and hold on!

Now Zully should go if she didn’t want to be there, I don’t understand why it was #amoryfuego pic.twitter.com/8TEuFiFnPc

Zully Pinchi: This is how you reacted when Gigi asked you if you were Martín Vizcarra’s lover? 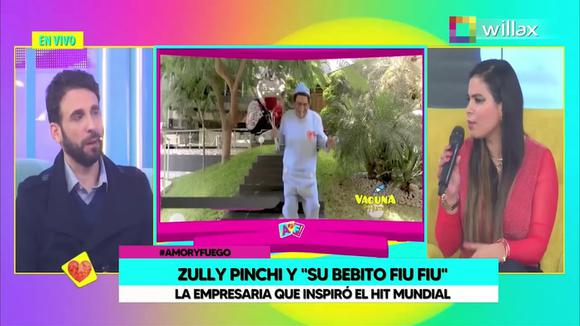