Andrea Escalonadaughter of the late producer Magda Rodriguez, announced live on the Wednesday June 22 edition of the “Hoy” program, where she works as a host, that she is expecting her first baby.

The news, of course, made all her colleagues happy, who did not hesitate to congratulate her and give her their best wishes for this new stage of her life. She shouted the news in the middle of the set of the Mexican entertainment program.

“I’m pregnant!”, She said very excited and immediately a video was broadcast in which the television presenter appears in a medical center undergoing an ultrasound. In addition, she was given some details of her pregnancy.

“I am 13 weeks. It’s all very beautiful and I still can’t believe it. With you I have shared all my moments, the bad ones, the disappointments and this one, which is the best of my life. I’m going to be a mom!” were some of his first words.

“I have always wanted to be a mother, I thank God very much and to my mother who from heaven I know sent it to me, I know that Magdita wants to return (…) And to Marquiño, because a better father could not have had my baby “she added through tears.

WHO IS ANDREA ESCALONA’S BOYFRIEND?

Andrea Escalona He assured that he is going through the best moment of his life next to the person who has stolen her heart and with whom she has been in a relationship for a long time and whose name is Marco.

So far not much is known about him because he is not from the television environment, but In the video that was broadcast on the program, you can see that she is very happy with the arrival of the baby that Escalona is expecting.

In these ultrasound images he appeared holding the hand of the television presenter, showing how affectionate and concerned he is and making it clear that he will be by his side in this new adventure of becoming parents.

Since it was confirmed that Andrea Escalona had a relationship with the man who is her partner, the two of them They have been careful not to expose themselves to prevent it from becoming media coverage and thus live their happiness in strict privacy.

“In the background there is room”: Choca Mandros revealed how his appearance in the series took place 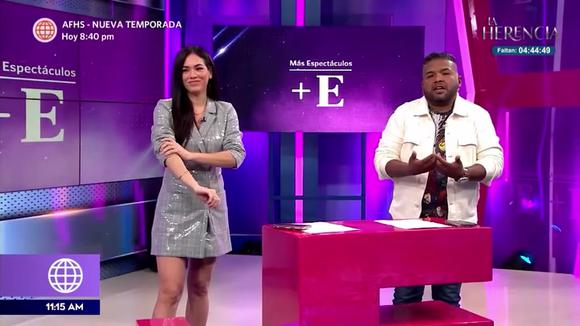