The members of the Korean group btstop representatives of the K-Pop musical phenomenon, announced on Tuesday their temporary separation after nine years of joint career in order to focus on their individual careers.

“let’s take a break now”, affirmed Suga, one of the members of the band, during a conversation with his companions that was broadcast on YouTube as part of the celebrations of the BTS FESTA, an annual event dedicated to his fans.

RM, another of the members, attributed the need for that break to the exhaustion derived from the constant rhythm of production, which has made BTS one of the most listened to bands internationally, with a huge fan base that is grouped under the emblem “BTS ARMY” (the army of BTS, in English).

“The problem with K-Pop and the whole idol system is that they don’t give you time to mature. You have to continue producing music and doing something”, justified RM.

The conversation in which the seven members of the band (RM, Jin, V, J-Hope, Suga, Jimin and Jungkook) they have been honest was recorded in the house they share and that, predictably, they will leave to start living apart.

Sitting in front of a table, with dinner on, the singers have talked for more than an hour about the problems they have had to face during this time, such as the loss of identity or the need to seek separate paths.

Despite the impact of the news in the music industry, a representative of Big Hit Music, the company behind the group, has clarified to the media that they will take time “to explore solo projects”, but will continue to be active as a band. under “different formats”.

In fact, last Friday BTS published “Proof”, their first anthology, made up of 48 cuts spread over three albums that cover the group’s career, and which also includes three new singles.

And last month, the musicians met with US President Joe Biden at the White House to address hate crimes against the Asian community in the US and speak out for diversity. (With information from EFE) 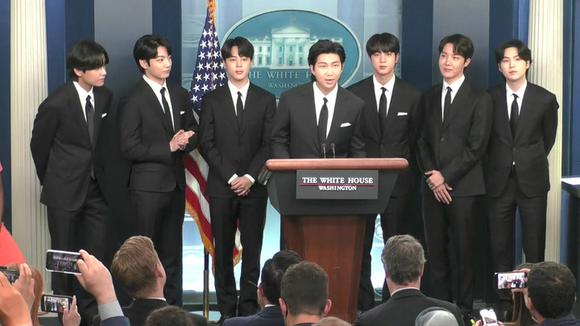 The South Korean K-pop group BTS took advantage of a visit to the White House on Tuesday, invited by President Joe Biden, to denounce racism against people of Asian origin in the United States. (Source: AFP)