Four years after announcing his retirement, Cameron Diaz He will once again be in front of the cameras to star in an action comedy alongside Jamie Foxx that will be part of the Netflix catalog.

READ ALSO: Cameron Díaz and the story behind the adult film he recorded when he was 19 years old

Foxx himself confirmed the signing this Tuesday by publishing a call with Díaz in which the athlete Tom Brady also participated to give advice on how to return to the profession, since he himself returned to play in the professional football league a month after announcing his retirement.

“I’m nervous but I don’t know how to do this. You know?”Diaz is heard saying on the call. For its part, the “streaming” platform limited itself to publishing a tweet that affirms that the actress is “Officially un-retiring.”

Despite the commotion mounted, Netflix is ​​keeping the plot details of the film under wraps, about which it is only known that it will be called “Back in Action” (Back to action), in a clear nod to the return of the actress to the screens.

Filming will start at the end of this year. and will feature Seth Gordon (“Horrible Bosses”) directing and Brendan O’Brien (“Neighbors”) writing the script. Díaz and Foxx previously worked together on “Any Given Sunday” (1999) and “Annie” (2014), which was their last role in a feature film.

The 49-year-old actress announced her retirement in 2018, after participating in countless blockbuster movies such as “My Best Friend’s Wedding”, “There’s Something About Mary”, “Charlie’s Angels” and “Shrek”.

His role in “The Mask” (1994), the iconic comedy starring Jim Carrey, catapulted Diaz to the forefront of Hollywood and made her one of the most bankable stars on the big screen.

Janet Barboza says that Melissa Paredes has lost her sanity 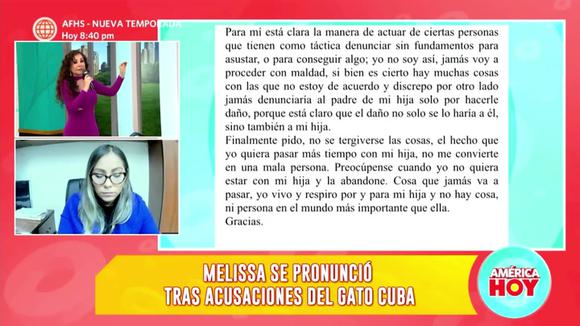 Janet Barboza says that Melissa Paredes has lost her sanity