A few days before saying goodbye to the year, the actress Carmen Villalobos suffered the loss of Capuchin, one of the dogs he shared with his ex-partner, the actor Sebastian Caicedoby giving the canine to him as part of the divorce agreement.

The protagonist of “Café con aroma de mujer” explained that although “it is difficult, it is complicated”, “agreements are agreements” and the pet had to go to “Medellín, to a farm house”, where Caicedo currently resides.

Villalobos shared the moment through his social networks, where images of his days with Capuchino remain, who together with Freud and Mambo, will remain with the soap opera star, made up the couple’s family. 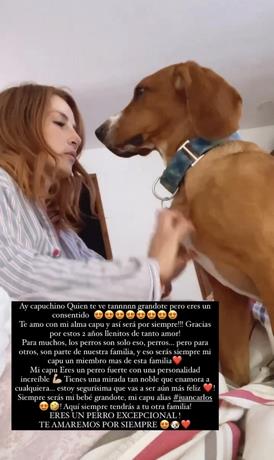 “My Capu you are a strong dog with an incredible personality. You have such a noble look that anyone falls in love… I’m sure you’ll be even happier. You will always be my big baby, my Capu alias Juan Carlos. Here you will always have your other family. You are an exceptional dog, I will love you forever”, quotes the text in one of the Instagram stories.

In July, the actors announced their separation after thirteen years of relationship, denying that it was due to infidelity.