There are characters that are born with their own lives. Those who since the stage lights reflect their image become living beings, who shine to such an extent that they end up burying their performers or creators.

Actors and actresses who have lived the experience of bringing such powerful performances to the cinema, theater or television, who have been faced with the dilemma of having to deal with the fame of the character against the work and talent that still remains to be exhibited before the public.

There are plenty of examples and it happened with the actors from the neighborhood of “El Chavo del 8”, in Mexico, actors who could never transcend without their emblematic characters, except Roberto Gómez Bolaños who, in addition to El Chavo, also had great success with The Chapulin Colorado.

The same thing happened in the Aztec country with Gaspar Henaine Pérez, “Capulinas”; Mario Moreno and his immortal “Cantiflas; Germán Genaro Valdés, “Tin Tan” and many other actors who only needed a single character to achieve success.

In the Dominican Republic there are several cases. “Balbuena”for example, there came a time when it almost completely swallowed its creator, Luisito Martí, but his artistic talent in so many areas was much stronger than the Dominican “tíguere” who did everything to travel to New York.

Martí took the story of Balbuena to the top, a humble and lazy dreamer who longed to travel to New York in search of the American dream, to be familiar to thousands of Dominicans who saw themselves reflected in him.

Balbuena even went to the movies in 1995 in the movie “Nueba Yol” (directed by Angel Muñiz), which marked the comedy genre and had impressive success at the box office, encouraging its sequel to be filmed in 1997 under the name of “Nueba Yol 3: Under the New Law”.

The nickname “Boruga”, With which the actor and comedian Felipe Polanco became known, he was adopted by one of his first characters, who appeared in the program “La alegría del país” (Color Vision).

“He was similar to Elvin Vinicio and he only lasted about six months,” said Felipe, who did not want to continue playing him because people already called him that. However, it was worth nothing because “Boruga” stayed with him forever.

In his long career, the humorist has represented more than 30 characters, who portray the idiosyncrasies of the Dominican people such as “Elvin Vinicio”, “Johanne Burgos”, Washington Liriano” and “Doña Flor”, but he was not reduced to any of them.

And it is not uncommon to know that a character “eats” the actor or actress because due to the great popularity they acquire, they hardly leave aside the character that led them to fame, for that reason many decide to keep them and continue with his career.

A similar situation was experienced by Charytín Goico with “La Mosquita Muerta”, a flirtatious secretary, who used her supposed innocence to get her job done.

The character was very popular in Puerto Rico and her career seemed to stagnate with “La Mosquita Muerta”, so the Dominican artist decided to put on a show where her other talents could be appreciated.

During the presentation, the public shouted for “La Mosquita Muerta”, to which he had to agree. On stage something mystical happened, Charytin says that her character took over her and without having it in a script, he told the audience why Charytín did not want her to be in the show. It was then that she decided to keep it forever.

Cheddy García also had his experience with “La desesperada del amargue” a village woman who danced and sang bachata. When Cheddy felt that she would be typecast, she chose not to play her again.

Roberto Salcedo kept the nickname “Fuikiti, fuikiti”, phrase that characterized the character “Armando Lío”, a naughty boy who appeared in the comedies of El Show del Mediodía, at the beginning of the 80s. When Roberto entered politics, his detractors called him “Fuikiti, fuikiti” to revile him.

In the middle of the last century, María Rosa Almánzar remained forever as “Cirita” and Julio César Matías “Pololo” (both deceased). They acquired the nicknames thanks to their performances on the radio program “Peasant Romance”.

One of the most recent active characters is “Darisho”, embodied by Irving Alberti, who at some point even feared that he would supplant him and not let him develop his life as an actor capable of developing other roles. 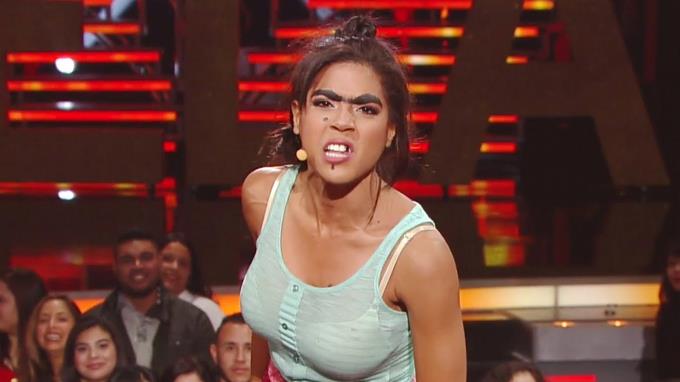 Even more recent is the one represented by Francisca Méndez, who became popular thanks to her participation in Univisión’s Nuestra Belleza Latina contest in 2015, although this connection with the public grew thanks to her character Mela la Melaza.

She recently told Dominican journalists that she has not made a plan to divide the actions of Mela la Melaza and her as it really is. but she admitted that the public asked her about Mela because the character stole people’s hearts before Francisca.

“That very rare thing always happened to me, after Nuestra Belleza Latina, that people asked me about Mela, as if I wasn’t Mela, the people were the ones who made that division and I never corrected anyone, it was very nice that they could say Mela and then they could also value Francisca because that gave me the opportunity as Francisca not to be left behind, to grow”.

Then he added: “Mela entered the audition and steals the hearts of the people before me, people loved her first, and then through my story, which is like that of all immigrants, that I have been through what myself, and it is the one that connects with those hearts, I have never planned to divide it, the people who love me is that they have done it”.