Puerto Rican artist Chayanne announced this Wednesday in Miami the release of his first album after an eight-year break and revealed that his daughter Isadora is preparing to follow in his footsteps in music.

“We are almost ready, I hope that (the album) will come out in the first months of 2023″said the singer, who will receive this Thursday, September 28, at the Latin Billboard award ceremony, the “Icon” award for his 44-year career.

“I started in this business when I was very young and thanks to my fans, their children and even their grandchildren, I am still going strong. All of this makes me feel very grateful.”Chayanne, 54, said during a panel at Billboard’s Latin Music Week.

Something that gives you a “pleasure” special is being able to be “witness” of the evolution that Latin music has experienced. What excites him the most right now is “the immense talent that young people have”.

Among those young people is his daughter Isadora, 21, who is graduating this year with a degree in Music from the University of Miami. “I am desperate for her to graduate so that we can work together”he said proudly.

“I can’t wait for him to release the music he’s making”Chayanne confessed. He explained that his “girl” composes, produces, arranges and sings.

In addition, the young woman is in charge of her social networks. “She is the one who publishes my things”counted.

Among the things that Isadora has uploaded to Chayanne’s social networks is the announcement of “Como tú y yo”, the second single from the new album by the Puerto Rican artist, which included the composition of the Venezuelan Servando Primera and the production of Motiff.

The song comes out this Thursday and Chayanne will sing it on stage at the Latin Billboard Awards, which will air on Telemundo and Telemundo Internacional from Miami.

It is a kind of romantic merengue, which Chayanne danced on the conference stage, unleashing the cries of the women present.

The artist confessed that he had been “nervous and anxious”before his panel, because for him it is very important “not to disappoint, to live up to” what is expected of him.

It’s the same reason he won’t go on tour until the end of 2023, as it takes a minimum of eight months of physical preparation and even more design and logistical planning.

“Every time I arrive in any Spanish-speaking country they receive me as if it were my home and that affection deserves my greatest dedication and my best”he expressed. 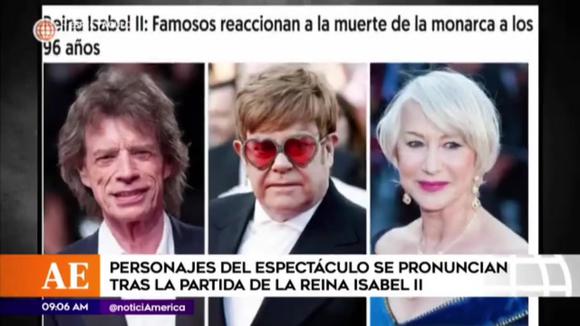 The end of an era. The death of Queen Elizabeth II was world news and generated many reactions on social networks. Figures from music, film and television expressed mourning for her loss. (Source: America TV)