Christian Dominguez and Isabel Acevedo returned to occupy the front pages of the entertainment media more than two years after their love relationship ended. The ex-partner was involved in a new confrontation after the actor revealed the alleged reason for the end of their relationship.

It all started when the singer of the Great International Orchestra assured in the “América Hoy” program that the popular ‘Chabelita’ gave her the choice between the son she has with Karla Tarazona or she.

“My relationship (with Isabel Acevedo) ends because she effectively gives me the choice between being with my child or understanding that I am not going to be with my child if I have a life with her”, Dominguez said.

The version of the ‘Chabelita’

These statements unleashed the indignation of the dancer, who did not hesitate to come forward to defend herself against these new accusations and to attack the cumbia singer.

“I broke up with him for another reason. I got tired of carrying his backpack… he had a series of problems. (…) I found some messages, I don’t know who that girl was, but on Instagram I found, she was flirting. Then a close person told me that he was flirting with a person who is not his current partner, apart from the mother (Karla Tarazona) of Christian’s son, it was also a constant fight”, he said between tears.

As he added, since Domínguez began to share the leadership with Pamela Franco in a program in Latina, he felt a distance on his part, which finally triggered their breakup.

The dancer assured that days before Christian Dominguez be protected with Pamela Francoshe found the singer’s watch in the cumbiambero’s house when she went to remove her belongings from the property.

“My clothes were at his house, he wanted me to live with him, but my mom told me: ‘you’re not going to go until he gets divorced’. I went to her house that day, I took out all my things and I found a watch in her bathroom, it was her watch (Pamela Franco) because later I saw it in some photos ”commented.

After denying the revelations of Domínguez, Elizabeth Acevedo confirmed on the show Magaly Medina that, through his lawyer, he sent a notarial letter to the cumbiambero so that he can rectify himself regarding the true reasons for their separation.

“She sent a notarized letter to Christian Dominguez to rectify the versions made against him for committing the crime of defamation”revealed the popular ‘Urraca’.

In this regard, the member of “America Hoy” assured that so far he has not received any document. About Isabel’s statements, Christian hinted that she told lies.

“I saw tears, I saw stories, events I didn’t know about, I heard dates, many things… I would love to break them down point by point with dates and so on for a topic of anger and liver, but at this point in my life I it cost, I apologized for the case, I apologized in four walls, I apologized publicly, to Karla, to each person I hurt, I faced the consequences of my mistakes “said the vocalist of “Great International Orchestra”.

The mystery of the underwear is over:

Elizabeth Acevedo She also referred to the intimate garment that, according to Karla Tarazona, she left at the house of Christian Dominguez when the actor still had a relationship with the television host.

“That is totally false. At the time, I asked Christian: Whose underwear is that? He told me that it was from one of his (Karla’s) friends who was staying at the house and that they had gotten confused while doing the laundry.“, Held”.

The ‘Chabelita’ also sat on the “Amor y Fuego” program, where she surprised more than one by offering a public apology to Karla Tarazonawith whom he starred in various confrontations in the past.

“I apologize (Karla Tarazona) if at any time I hurt you a lot or if I made you feel bad. I already want to finish this topic, I want to turn the page, I am in a very beautiful moment of my life and I think that everything has ended here“said the ex-partner of Christian Dominguez.

They smoke the pipe of peace:

After hearing Isabel Acevedo’s mea culpa, Karla Tarazona He linked up by telephone with the show program to accept the dancer’s public apologies.

“I want to end this situation too, I think it’s human to err, we’ve all made mistakes at some point in our lives. (…) I am also going to end this, I have not declared anyone because I do not plan to get involved in a lawsuit between two people. Tell Isabel that public apologies are accepted”, Said the television presenter. 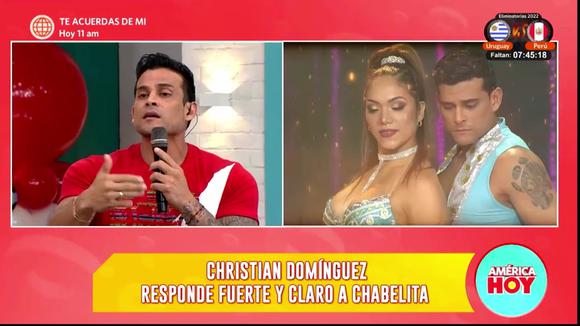