On a mobile for LAM (America), Cinthia Fernández destroyed Ana Rosenfeld as a panelist and the lawyer responded with a resounding setback from her Twitter account.

About the role of Rosenfeld as a member of the LAM panel, Fernandez did not hesitate to shoot: “I hate it, it seems to me that when you’re an angel you have to play it, you can’t go to be a panelist being a friend, you can’t do a panelism of cronyism, for me“.

To illustrate your opinion on Anne Rosenfeld, Cynthia Fernandez he referred to an example from the recent Wanda Nara scandal. “The other day she gave an absurd excuse about Icardi, no one believes it, that’s fine, I understand that she is Wanda’s friend and lawyer, she is playing the role of friend but not that of panelist, being objective and telling the truth“, he lashed out.

For its part, Rosenfeld replied on LAM’s floor: “First of all, everyone knows that I am not an angel with experience, I do not have the experience that my colleagues have, I am learning. Really, after the things I’ve lived through in my life, whether she treats me or destroys me, literally doesn’t interest me. She is an area that I did not know, I am learning and I feel very good“.

However, Anne Rosenfeld then it was more aggressive against Cynthia Fernandez from the LAM Twitter account, where he stated: “The one who ‘towers’ listening to my opinion is because he doesn’t care about knowing anything about his ‘rights’ and ‘obligations’! Poor the one who does not have the ability to understand it“. 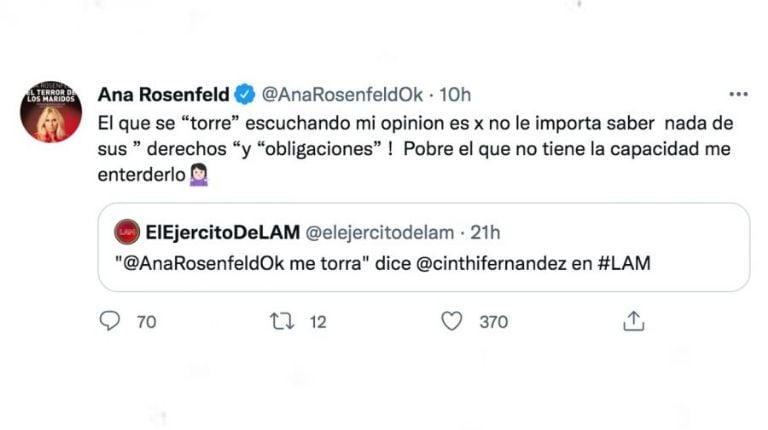 Then he went for more and Rosenfeld shot his colleague: “Even more! If she had won her nomination as deputy, there she would have had to get used to many like me… In other words, she would have been ‘torrado’“. 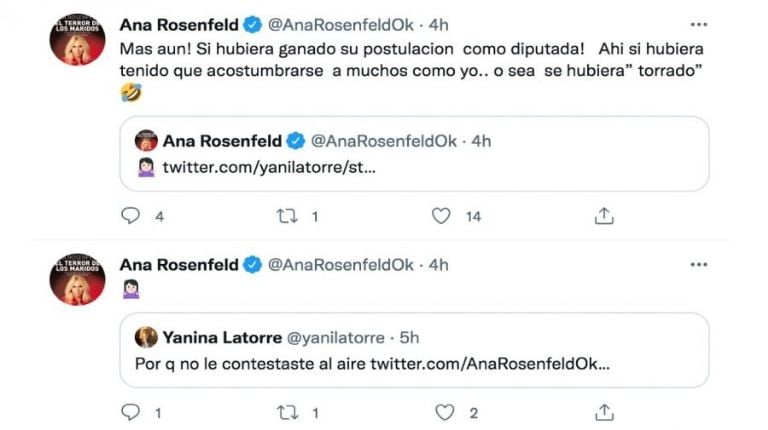 In the middle of downloading Yanina Torres he asked Anne Rosenfeld Why didn’t you say that to Cinthia Fernández on the air, but the lawyer only limited herself to responding with an emoji of disinterest.