Cucho Galarza He has years of experience in music and knows very well each score that has led him to be placed on the best stages inside and outside the country. On this occasion and without leaving his roots, Grupo Río, to make one of his dreams come true: to sing his own compositions as part of a facet in his life.

This is how the theme titled “Let me be with you”, a melody to that unrequited love where sometimes it is better to let go instead of repairing.

“I imagined the plea of ​​a lover to be able to continue a relationship that had no future. I should have finished this song months ago, I had to leave it on standby for a long time, but my friend Elías Ponce Jr. was the one who insisted on finishing it. In the end I listened to him and I was able to complete my project”, Cucho Galarza told.

Something that the artist clarified is that not looking to be solo. However, he highlights that like any musician it is important to reinvent oneself, explore new scenarios and make you feel that talent that comes from the heart when composing a song.

“Being a solo artist is not something I’m looking for, it’s just the need to be able to show the ideas that come to my head. Actually, I have already released several solo songs, but very few have found out about it because I only talk about it on my social networks and for my followers. So it is something that remained between friends”said Cucho, who is clear that now he wants to make a difference.

“I think the song deserves a chance to reach more people, not so much for me, but because I have felt that perhaps it is unfair to condemn it to oblivion”added the renowned artist.

“I WILL ALWAYS BE ANOTHER RIVER”

Cucho Galarza, a member of the Río group, did not hesitate to thank his companions on stage, Chicho and Pocho, Well, with them they began this great musical adventure, becoming one of the most beloved and recognized bands inside and outside the country.

Topics such as “The University”, “Everything was fine”, “The worst of everything”, are songs that have remained engraved in the minds and hearts of Peruvians. It is for this reason that Cucho has no plans to leave his group. On the contrary, he feels very comfortable because They are the ones that drive him to continue reinventing himself, in addition to continuing to grow on and off stage.

It should be remembered that Cucho Galarza began in the world of music in 1978. He has written emblematic songs for the Rio group such as: “Al norte de América”, “Contéstame”, “Lejos de ti”, “La Universidad” (co-authored with Pocho and Chachi), “Historias”, “Ventana”, “Joaquín ”, “Planeta bar” “Without you”, “Flee from you”, and more.

Melissa Paredes acknowledges that a new retouch was made 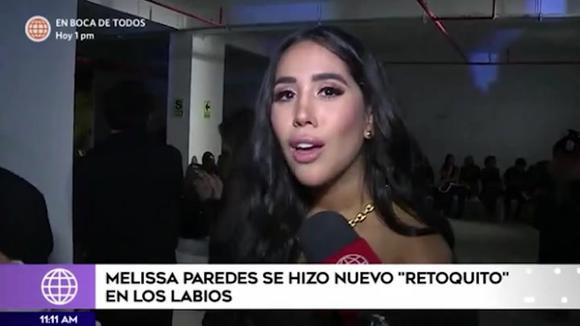 Melissa Paredes acknowledges that a new retouch was made