After the closure of his supermarket, Diego Brancatelli gave a note to the LAM program and, assuring that they took his words out of context, he expressed his outrage with Canal América and called his colleagues “zero code”.

“It’s a shame what America TV did with me yesterday. They used me. It is not done. Zero code. I have to learn. Or be like them. When it’s no, it’s no. I can’t always be good. You have to be f… sometimes. Learning”, he sentenced angrily Diego Brancatelli from your Twitter account. 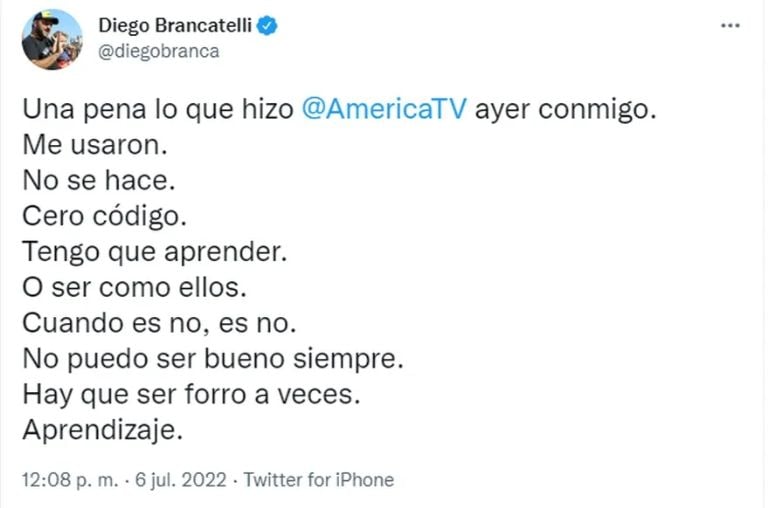 Asked about the controversy by LA NACION, the journalist explained that he agreed to give the interview when his intention was not to talk about the closure of his supermarket in the media. “I made a release on the radio where I work (AM750)did not want to talk to anyone, but on Tuesday they came to the door of the canal (C5N) those of LAM. I told them five times no, but they insisted. ‘Please, you know what my job is like, they’re going to challenge me,’ he told me. ‘If I don’t record you, it’s like you don’t want to talk and it’s going to be worse. Say what you want, it’s cool‘” he explained Diego Brancatelli about the pact on which he decided to agree to give the mobile to America channel.

Then he remarked: “I told him that later they take me out of context, or they say something that I don’t say, and all the media use it to continue adding to a snowball of something that isn’t dramatic or bad. They assured me that it was not going to be like that and I told them to turn on the camera”.

During the note in question with LAM, Diego Brancatelli had argued that the closure of his supermarket was not a consequence of the crisis affecting the country. “I didn’t close because of the crisis, I closed because of a lot of our internal issues. Before there was a partner who was dedicated, but he went to live abroad and now nobody can dedicate himself, so we closed it”, he assured.

Also, Brancatelli explained the reason for his anger at the treatment of his interview in LAM. “America headlined: ‘Due to the crisis, Brancatelli closed his shop.’ They put that graph, they uploaded it to Twitter and Instagram, and that is false. Then the little angels and Angel destroyed me, I’ll fart, I told them I didn’t want to”, he questioned.