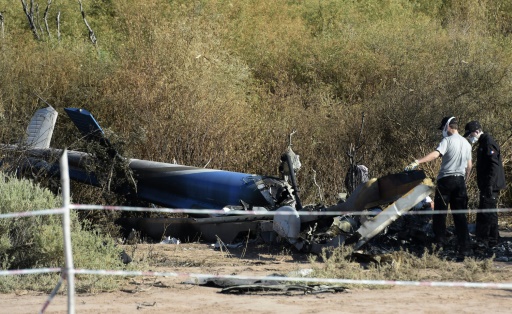 Investigators from the Investigations and Analysis Office examine the carcasses of crashed helicopters in Villa Castelli, northern ArgentinaJUAN MABROMATA

The production company ALP was condemned on appeal in Amiens for “inexcusable fault” and will have to compensate the family of a sound engineer victim of the fatal helicopter accident which occurred on the set of “Dropped” (TFI) in Argentina in 2015, according to a judgment consulted Thursday by AFP.

This decision confirms the judgment of January 7, 2021 rendered by the social center of the Laon judicial court, considering that the fatal accident in which Edouard Gilles, recruited as chief sound engineer, was killed is attributable to “the inexcusable fault” of Adventure Line Productions” (ALP).

The production company had appealed against his conviction at first instance.

The Amiens Court of Appeal sentenced the company specializing in adventure television games, which also produces Koh-Lanta or Fort Boyard, to pay the total sum of 90,000 euros in damages to the widow and two sons of ‘Edouard Gilles died at the age of 61, against 80,000 in the first instance.

“It’s a relief, I’ve been on this trial for years and they don’t want to admit that they are guilty,” reacted to AFP Gisèle Gilles, widow of the sound engineer.

On March 9, 2015, the filming of this adventure game had turned tragic: two helicopters had collided in mid-flight, causing the death of ten people, including three high-level French athletes, navigator Florence Arthaud, boxer Alexis Vastine and the swimmer Camille Muffat, as well as several people employed by the production company ALP.

The show was to be broadcast during the summer of 2015 on TF1. French sportsmen were to be dropped in isolated areas and challenged to return to “civilization” in less than 72 hours.

In 2021, the company ALP was indicted for “involuntary homicides”.

This step, a prelude to the decision on a possible trial, was expected after previous indictments: that in February 2019 of the Swedish Peter Högberg, “in charge of security during filming”, then in October 2020 of Nicolas Roussel, production director of the show.

The French judges now suspect a “characteristic fault” of the indicted: having underestimated the budget allocated to air resources and favoring financial criteria in the choice of pilots and helicopters, “to the detriment of the safety of people”.