this friday the 25th Elton John turns 75 years old. Undoubtedly one of the greatest balladeers in the history of rock, owner of a life marked by success, excesses, claims and official recognition. The last of them was when last November Prince Charles anointed him in a ceremony at Windsor Castle as a member of the Order of the Companions of Honour, an exclusive distinction granted by British royalty that, until now, only reaches about 65 personalities.

This acknowledgment came at a time when, like more than 50 years ago, the radios have a song of his in high rotation, in this case, his crossover with the British Dua Lipa in the remix “Cold Heart”, which rescues passages from his classics “Rocket Man” and “Sacrifice”.

It’s just that since he posted his first big hit in 1970 with “Your Song,” the music charts have practically never been deprived of the contributions of this formidable balladeer. Creations like “Tiny Dancer”, “Good Bye Yellow Brick Road”, “Crocodile Rock”, “Candle In The Wind”, “Don´t Go On Breaking My Heart”, “Don´t Let The Sun Goes Down On Me” , “Saturday Night’s Alright For Fighting” and “I`m Still Standing”, in addition to those mentioned above, are just a few examples of it.

But it is also incredible his family image, his commitment to noble causes and the recognition of royalty in perspective of what his life was like in the ’70s, when he was dominated by excesses.

Born in the British town of Pinner, in 1947 under the name of Reginald Kenneth Dwight, Elton John had a childhood marked by his precocious musical talent that earned him a scholarship to study at the prestigious Royal Academy of Music, perhaps his lifeline against his excessive shyness and the indifference of his parents.

After integrating several bands, among them that of the veteran blues player Long John Baldry, where, in homage to him and his saxophonist Elton Dean, he adopted the stage name by which he is known; he formed an indestructible compositional duo with lyricist Bernie Taupin that endures to this day. 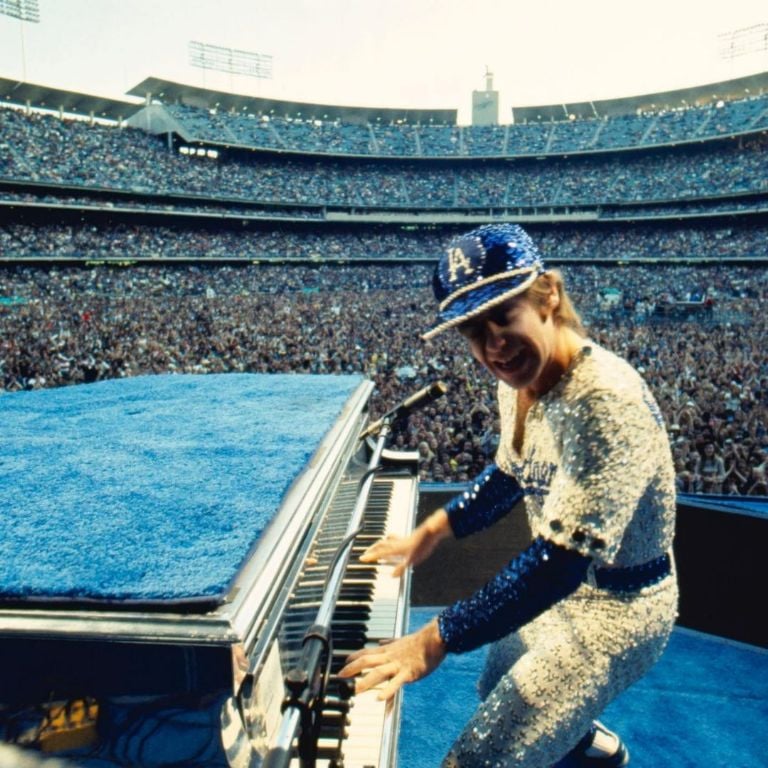 Thus, he made an endless succession of hits throughout the ’70s with songs with which he showed that, with the focus always on the melodic aspect, he was able to move freely between ballads, glam and hard rock.

This rise was accompanied by explosive live performances, where the once shy young man began to show a histrionics that found its visual echo in the extravagant costumes he wore, always crowned with flashy glasses, a fetish that characterizes him to this day.

But the image of the musician was also fed by those years of legends, later confirmed by himself, about a crazy lifestyle, with an excessive consumption of drugs and alcohol, and a voracity for sex.

Also in those years he fostered some friendships that fueled his musical fame and the legends that surrounded him, such as the case of Rod Stewart, who recorded a well-known version of “Your Song”; The Who, who invited him to participate in the movie “Tommy”; and John Lennon, with whom he collaborated on the song “Whatever Gets You Thru The Night”, and who anointed him as godfather to Sean, the only son that the ex-beatle had with Yoko Ono.

In the ’80s, Elton He began to travel through more conventional terrain, with ballads suitable for radio consumption of the time, always maintaining musicality but without major artistic risks. From that decade date hits like “Nikita”, “Sacrifice”, “I’m Still Standing”, “Sad Songs” and “The Club At The End Of The Street”, among others.

In the early 1990s, he decided to put an end to his crazy lifestyle and successfully entered rehab that sobered him up but did not rid him of his extravagances and divo-like behaviors.

Since then, Elton John continues to reap success; he formed a family with David Furnish, a relationship that has lasted almost 20 years and with whom he has two children; he heads charity crusades and doesn’t hesitate to associate with young artists.

Also in recent years he began a tour that he promised will be the last of his career and will have a stopover in our country.

by Hernani Natale for Télam