evelyn candle She could not stand the criticism of Magaly Medina anymore and, in an interview, attacked her and assured that her husband is not her “prisoner” and that she can go out and have fun since they constantly communicate.

LOOK: Jonathan Maicelo to Stephanie Cayo after confusing ‘avocado’: “Let him go down to my place and I’ll teach him the verb to be”

“When you get married, you don’t necessarily have to be a prisoner. My husband goes out, I know who he goes out with, and I still go out here with my friends and I have a great time. I don’t know where it says that getting married means having a man or a woman in prison, that doesn’t go with me, but there are people who hang on to one. I know how it is”Evelyn told El Popula.

Evelyn Vela compared her relationship with that of Magaly Medina and the notary Alfredo Zambrano, stating that her husband is not her prisoner.

“It’s your lady’s problem what you think. If she thinks she got married to keep her husband imprisoned, what a shame, not mine, mine can enjoy, have fun, because we are a married couple that enjoy, we love each other and we have the freedom to go out with whoever we want, there is no problem”concluded the ‘Queen of the South’.

Magaly Medina criticizes Evelyn Vela for defending her husband, who was seen with another woman

Magaly Medina used the cameras of her program to criticize Evelyn Vela’s recent statements for a local media, where she defended her husband Valery Burga, who was seen with a mysterious woman at an event in Miami, United States.

The host of the program “Magaly TV: La Firme” indicated that Evelyn should not have defended her husband at the national level: “For Evelyn Vela, the woman (who recorded the controversial video) is to blame… she believes her husband is a holy dove.”

Medina questioned the marriage of Vela and Burga, who live in different cities, despite being married since 2021.

LOOK: Amy Gutiérrez is honest about her sexual orientation: “I’m like pansexual” (VIDEO)

“Each one makes his life in very distant cities, but I say how that can be his notion of marriage. Well it may be, that they don’t see each other all the time and each one can go their own way, but for that it was better not to get married “critical.

It is worth mentioning that the images of Valery Burga at a night event in the United States were broadcast by the program “Magaly TV: La Firme” on February 28. 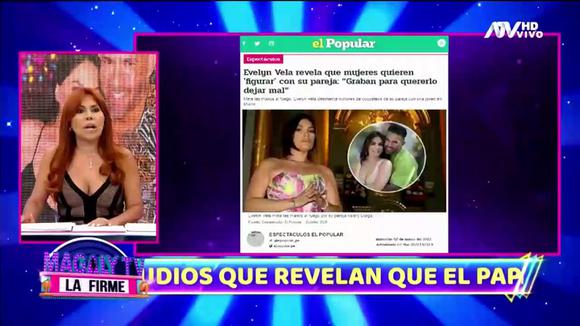