The family of the Mexican actress Susana Dosamanteswho died in Miami this Saturday at the age of 74, plans to cremate her remains and take the ashes to Mexico to rest in her country, a family source told Efe.

Dosamantes, mother of singer Paulina Rubio, died at Mount Sinai Hospital in Miami Beach, where she had been treated for about four months for pancreatic cancer.

According to the family source consulted by Efe, who asked not to be identified, she had been hospitalized for about a week.

For now, the family has not decided if a funeral will be held in Miami, but if there is, it will be after the long weekend for the July 4 holiday, the source told Efe.

“With my heart in my hand and deep pain I want to inform you that my mother, the beautiful Susana Dosamantes, today begins a new cycle, in total peace and surrounded by her family. My example of life, a being of light, a strong woman, today she joins eternal life”, Paulina Rubio wrote on her Twitter account on Saturday night.

The family of the actress, who had two children, Paulina and Enrique, as a result of her marriage to the Spanish lawyer Enrique Rubio, who died in 2011 and from whom she separated in 1974, reported on April 21 that she had been diagnosed with breast cancer. pancreas.

“His children, his grandchildren and his family are united and focused on his recovery. We have full confidence in the medical staff both in Mexico and in Miami, which has extensive experience and professionalism in this type of cancer”added the Rubio Dosamantes brothers in that statement.

On her Twitter profile, where she wrote her last message on May 29, Dosamantes defined herself as “a hermit with many friends.” “I love my family, my country, my house, my profession, I like good people, I take the bad ones out of my way!” she added.

Born in the Mexican city of Guadalajara on January 9, 1948, Dosamantes began her artistic career in film.

His first role was in the movie “Swirl of passions” (1968) and he came to participate in more than 28 productions on the big screen, including “Río Lobo” (1970), starring John Wayne.

However, his most recognized roles were in soap operas.

Dosamantes was a permanent part of the history of the Mexican television giant Televisa since 1971, when he belonged to the cast of the original version of “Italian girl comes to marry”.

The actress began to stand out in 1977, with her performance in the second version of the iconic telenovela “Corazón Salvaje”, in which she shared a role with Angélica María, Juan Martín and Fernando Allende.

Her most recent role was that of Tita, widow of Montiel, in the 2021 production “Si nos dejan”.

However, no role gave her “more happiness” than that of mother and grandmother, the artist told Efe on the red carpet of Premio Lo Nuestro in Miami, where she paraded last February, accompanying her daughter Paulina Rubio, who She was recognized for her 30-year career.

After her divorce from Rubio, Dosamantes married another Spaniard, businessman Carlos Vasallo, owner of the América Tevé television channel, whom she divorced in 1988.

“We greatly appreciate the doctors, nurses and all the hospital staff for taking such professional care of my angel. We infinitely appreciate your understanding and respect at this difficult time. We ask for privacy for your family and friends.”Paulina Rubio wrote on the networks when announcing the death of her mother. (Source: EFE)

“Matilda, the musical”: meet the actors who are part of the new version here 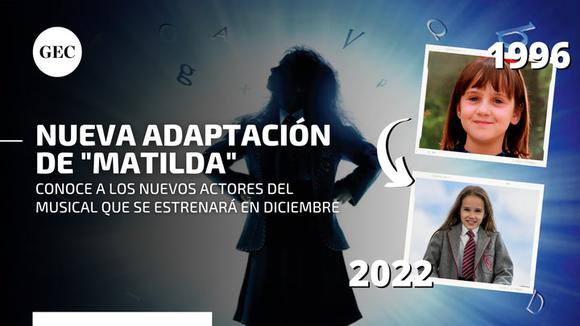 A new version of the remembered film “Matilda” will be released on Netflix later this year. Who are the actors who will play their iconic characters in this film? We tell you in this video.