Stephanie Cayo became the target of harsh criticism after the premiere of the film “Until we meet again”, a film directed by Bruno Ascenzo for the Netflix platform.

In the midst of the harsh comments towards the protagonist of the film, the actress Fiorella Cayo spoke on her Instagram profile to defend her sister.

Through a long message Stephanie Cayo’s older sister indicated that she and all the other members of her family have worked hard to achieve good results in the entertainment industry and “Nothing has been easy”.

“These have been days of great expectation, congratulations, thanks and also criticism from people who believe they have the right to say that we are a privileged family. We can question, but not judge, as if its truth were the only one. One thing is that we are workers and have been taught from a very young age to work on our talents and win everything through effort and perseverance. and quite another, is that we have had it easy”expressed Fiorella Cayo at the beginning of her message.

“Our dad belonged to the air force, the resources were enough for the 6which made each one of us work at an early age to pay for our studies, help with water, electricity, food, buy clothes and our own car with our effort”he explained.

Fiorella Cayo indicated that Peruvians should support the work and effort of their compatriots. In addition, he invited the public to recommend the national film so that foreigners are encouraged to visit the country and learn about its riches.

“We did not have anything easy, as some people would like to believe. Except for Stephanie, who has been working since she was 9 years old. There are no rings. There is work and solid human relationships that are formed over time with the same values ​​and the same ideals: to share the best we can of ourselves and give a positive meaning to everything we do. Because what you do is not important, but the meaning of what you transmit and achieve with your work, what makes it great”he expressed.

“Nothing is free and everything implies sacrifices, efforts, work and a lot of loyalty towards your ideals in order to achieve them. Our parents gave us values ​​that are very difficult to corrupt. We are not perfect, nor will we ever come close to that, but we do have a lot of good in our souls to share and we will continue to do so. I invite you to see the positive and walk the path, as a great team, all Peruvians to feel very proud. Let us enjoy that Peru today is the protagonist in so many countries that the film achieves the objective of inviting the whole world to come and discover Peru”he concluded. 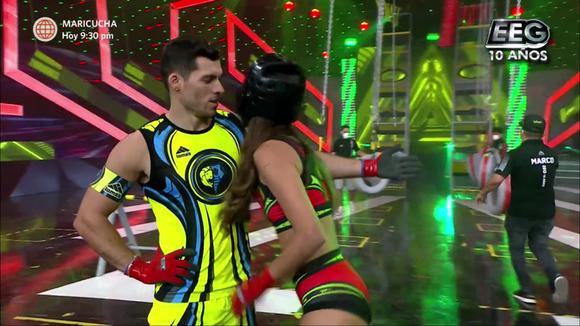 Luciana Fuster and Patricio Parodi starred in one of the most romantic moments of This is war 10 years when the model gave the captain of the “Warriors” a tender kiss after he won one of the extreme speed competitions against Tepha Loza.