taylor hawkins, drummer for Foo Fighters, died in Bogotá. The American rock band issued a statement on the night of Friday, March 25, to report the death of the musician, who was in Colombia to perform at the Festival Estéreo Picnic 2022.

After the sad news, the Colombian Prosecutor’s Office made an official statement to report the result of a medical study that was carried out on the body of the 50-year-old musician.

“After completing the initial forensic medical study of the body of Taylor Hawkins, drummer of the band Foo Fighters, who died yesterday in a hotel in the north of Bogotá, the Attorney General’s Office reports the following: In the urine toxicological test performed on the body of Taylor Hawkins, 10 types of substances were preliminarily found, including: THC (marijuana), tricyclic antidepressants, benzodiazepines and opioids”was written at the beginning of the statement.

“The National Institute of Legal Medicine continues the medical studies to achieve the total clarification of the events that led to the death of Taylor Hawkins. The Attorney General’s Office will continue with the investigation and will inform the results obtained within the framework of the same in a timely manner”it concluded.

#ATTENTION | Official statement from the #Attorney General of the Nation on the death of foreign citizen Taylor Hawkins, drummer of the band Foo Fighters. pic.twitter.com/K3Z7Ss9wcO

hawkins He was one of the visible figures of the band together with the former Nirvana Dave Grohl. At concerts he used to leave the drums to sing rock classics like Under Pressure, by Queen and David Bowie, or Rock n’ roll, by Led Zeppelin. 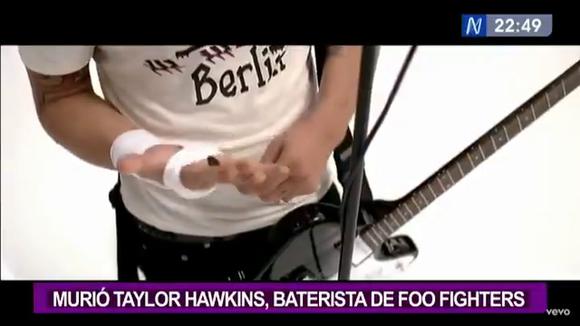