The singer Gian Marco would have given himself a new opportunity in love with the Colombian Juliana Molina, as reported this Thursday, June 9, by the program “Amor y Fuego”.

“Juliana Molina would then be the owner of Gian Marco’s heart, we are going to examine how long this closeness has been going on”, Rodrigo Gonzalez said.

Likewise, the popular “Peluchín” showed that the Peruvian singer-songwriter and the Colombian actress have commented on their Instagram photos since July 2021.

“Since when did he hook her, July 17, 2021. She posted a post, where she looks very pretty, with a light, and puts #light. Look who is one of those she tells him. Look at him, the official Gian Marco puts the chick, heart and star emoticons on him ”, Rodrigo commented while showing the images.

Speculation about the new romance arose after the interpreter of “Take her out to dance” shared a photograph with the young woman, and in the caption she wrote “Ella”, along with a heart emoticon.

Juliana Molina was not far behind and reposted the Peruvian’s publication and, on the image, wrote: “He”. However, soon after, Gian Marco changed his mind and deleted the publication.

Who is Juliana Molina?

Juliana Molina is a Colombian actress and singer who participated in the film “Calichín” by Aldo Miyashiro. Also, years ago, she participated in “La Voz Perú”, where Puma did not hesitate to praise her beauty.

On his Instagram account, he has more than 4,000 followers with whom he shares photos and videos of the trips he takes.

After the broadcast of “Amor y Fuego”, the national singer shared a new photograph on his social networks in which he shone together with the Colombian. He appears hugging Juliana affectionately. “She”, It was the message he wrote about the shared image on his Instagram story.

Gian Marco Zignago at the closing ceremony of Lima 2019 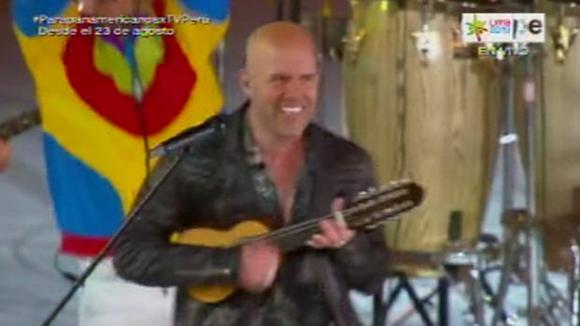