the cumbia singer Giuliana Rengifo He referred to the recent images where he was caught getting into the truck of a mysterious man.

WATCH THIS: Giuliana Rengifo responds forcefully to criticism: “They watch a lot of trash TV, read a book” (VIDEO)

It is worth mentioning that the Instarándula portal shared photographs of the artist entering a luxurious vehicle. However, when consulted by the communicator Samuel Suárez, she did not want to answer who she would be.

WATCH THIS: Giuliana Rengifo assures that Magaly “needs” to go back to prison: “she came out worse and without repair of anything”

After opening the question box on her Instagram account, the cumbiambera clarified that it was not a notary and that it would not be someone married or in a relationship.

“Those who have tried me have always been single men without commitment. Why do they allow themselves to be fooled by such ‘bad guts’ people?” She replied.

WATCH THIS: Giuliana Rengifo confirms that she will sue Magaly Medina and Arantxa Mori: “for my daughters, my mother and my career”

Likewise, the singer pointed out that she does not pay attention to the money of her suitors. “I have never been interested, nor am I, nor will I be. The little or much that I have is based on my work, effort and sacrifice, ”she indicated. 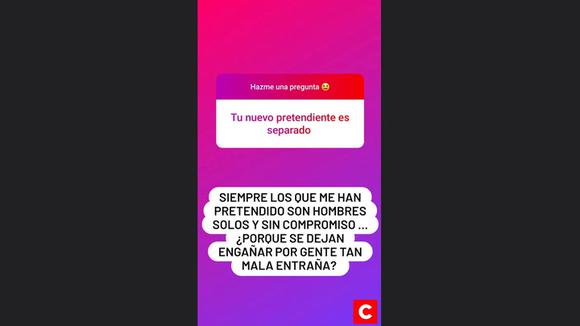 Giuliana Rengifo assures that she will continue to sue Magaly Medina: “once she went to jail”

The artist appeared on the YouTube program “And now what?”, where she said that she will continue with the lawsuit that she filed against Magaly Medina for calling her a pelandusca.

“Within her production there are people who tell me many things, among them they tell me that Mrs. Magaly Medina is very angry with me,” said Giuliana Rengifo