The separation of Jorge Rial and Romina Pereiro is the subject that everyone has been talking about for days (it gave an impasse to China Suárez and the entire Wandagate, luckily). Although rumors of a strong crisis in the couple began months ago, they only confirmed it a few weeks ago. And it was the former host of “Intruders” who announced it on his Radio 10 program, Argenzuela.

Jorge admitted that the pandemic hit them hard and, for reasons he did not want to reveal, they decided to “end love”. However, on more than one occasion Rial stated that everything “is fine” between them and that they ended up on the best of terms. He even said that they ate pizzas as a family, days ago. But there is a fact that marks “something”: the conflict over divorce is not moving anywhere.

In the midst of all the controversy over their separation, Jorge Rial flew to Los Angeles with his daughter Rocío. And from there the famous shared a photo with Pastor Dante Gebel and a very long text with a deep reflection on life and the surprises he gives. 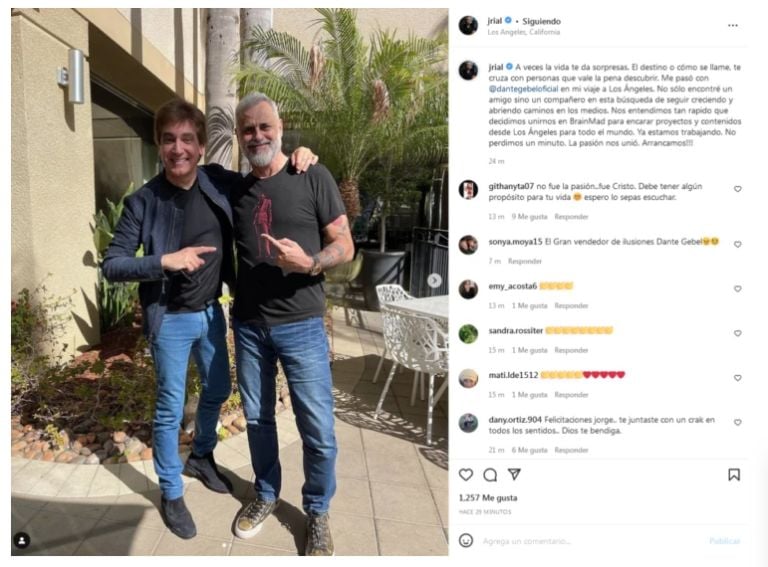 “Sometimes life gives you surprises. Fate or what it’s called, crosses you with people worth discovering. It happened to me with @dantegebeloficial on my trip to Los Angeles. I not only found a friend but a companion in this search for continue growing and opening paths in the media”, he began.

“We understood each other so quickly that we decided to join BrainMad to tackle projects and content from Los Angeles to the whole world. We are already working. We didn’t waste a minute. Passion brought us together. Let’s start !! “, she wrote from his Instagram account.

From there, Rial also uploaded an emotional video with the lyrics of the song “Stand By Me”. And no one was very clear for whom it was directed: Romina Pereiro or Alejandra Quevedo, his lover after the separation? There were no answers to this question…

Now, the one who was present on social networks was Romina Pereiro, who, far from reacting to her ex-husband’s posts, dedicated herself to her profession and put a wave on her own social networks.

The nutritionist shared a video where she talked about how to deal with the massive consumption of salt that has occurred in recent times. However, what caught her attention was a comment left for her, where she said: “We love you Romi.” Moved by the love she receives, Pereiro replied: “Thank you, me too! These messages are a treat for the heart!”