Richi Rodríguez, impersonator of Robert Plant and finalist of the third season of “I am” In 2012, 10 years ago, he returned to participate in the new edition of the reality show – which celebrates a decade since it premiered – with a new character: Bono from U2.

“Richi?…Richi Rodríguez for those who follow the program, He has already been a great super participant of ‘Yo Soy’”said a surprised Maricarmen Marín, to which Ricardo Morán added: “Third season of ‘Yo Soy’, 10 years ago, Richie Rodríguez imitated Robert Plant”.

“I can’t believe it… The work you did was impeccable”added the singer. The participant said that during this time he was off the screen, he continued to be dedicated to music and her business. “For me it is a tremendous pleasure to be here”, he pointed.

“You remained in the pantheon of the greats of ‘Yo Soy’. 10 years later we find you here again adding risking that we say no… Why?Moran asked. “I want to greet each one of you (the jury)… I came to greet you and congratulate you for pushing Peruvian talent so well all this time”Rodriguez replied.

After this brief conversation with the jury, Richi Rodríguez introduced himself and began his imitation of Bono, lead singer of U2, and performed an outstanding interpretation of the song “New Year’s Day”with which he surprised the members of the jury table.

Katia Palma and Jorge Henderson were the first to give their vote and they said “Yes”. Maricarmen Marín joined them and even highlighted his resemblance to the current Bono. Finally, Ricardo Morán agreed with his teammates and gave Richi Rodríguez -as Bono from U2- the direct pass to “Yo Soy”.

Yahaira Plasencia: “Daniela Darcourt makes a style of salsa totally different from mine” 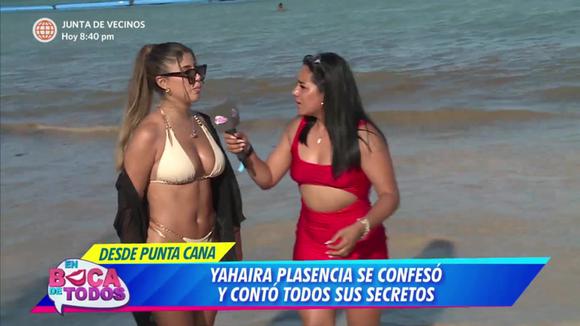 Yahaira Plasencia spoke with On everyone’s lips and asks that they no longer confront her with Daniela Darcourt. “She does a totally different style than what I do, there is no point of comparison. Dani does more romantic salsa, I do more urban salsa. So each one has their style, people choose who they like and that’s it,” he clarified. singer. (Source: America TV)