The Puerto Rican singer Ismael Rivera son, eldest son of the legendary salsero of the same name, died this Saturday at the age of 67, presumably from a heart attack, a source close to the artist confirmed to the Efe agency.

According to the source, Rivera Jr. shared with his partner in his vehicle, when this “He began to feel bad” and died in the parking lot of a fast food restaurant in the tourist sector of Isla Verde in Carolina, a city near San Juan.

“I just lost one of my best brothers,” assured the source, who also said that “Ismaelito”, a nickname carried by Rivera Jr.

For its part, Richie Bastar, musician of the legendary salsa orchestra El Gran Combo de Puerto Rico, also lamented the death of his colleague and compatriot.

“La Salsa is in mourning, may Ismael Rivera Jr, son of El Sonero Mayor, rest in peace, my condolences to his family and fans (sic)”, Bastar expressed in his social networks.

Our salsa community in mourning again, Ismael Rivera Jr. has just left, the Heir by Right of the Legacy of Sonero Mayor Ismael Rivera (father) Rest in Peace.#IsmaelRiveraJr pic.twitter.com/J2uEK0EgLJ

Son of Virginia Fuentes y Rivera, known as “El Sonero Mayor”, Rivera Jr. was born on December 10, 1954 in Santurce, a district of San Juan and a well-known musical and artistic area, according to the Saoco Salsa website.

Taking advantage of the experience he saw and heard from his father, In 1977 Rivera Jr. joined the Combo de Cortijo, directed by Rafael Cortijo, his father’s musical teacher.

In this group, Rivera Jr. had the opportunity to be the male voice on the album “El Sueño del Maestro”, while Fe Cortijo was the female performer.

Later, Rivera Jr. recorded the production “Fruto Humano”, in which the song “Muralla de Bronce” stands out, dedicated to his father.

After participating in these groups, Rivera Jr. released the album “La Leyenda Sigue” and later, together with the sons of the salseros Andy Montañez and the late Pellín Rodríguez, they presented the album “Los Hijos de los célebres”.

Among the last musical projects in which he participated was in the album “Colegas” by Gilberto Santa Rosa, where he collaborated on the song “Bailadores”.

He also contributed his voice to the songs “El charlatán” and “El sazón de grandmother” in the project “100 años de Lito Peña: Una Huella Musical”dedicated to the also legendary Puerto Rican musician and director of the Pan-American Orchestra, in which Ismael Rivera Sr. participated.

Vicente Fernández: they raise an altar on his ranch 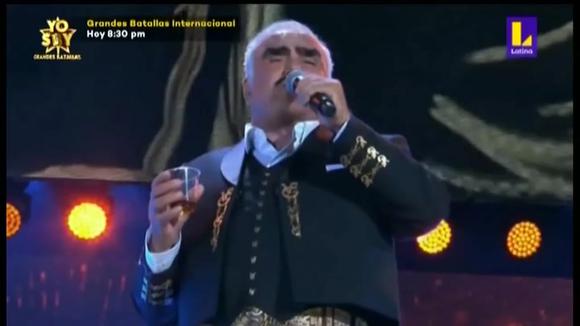 Vicente Fernández: they raise an altar on his ranch https://www.latina.pe/noticias