Called on Tuesday to speak during the lawsuit he is bringing against his ex-wife Amber Heard for defamation, Johnny Depp categorically denied the accusations of violence brought by the actress.

The assertions of the latter would have “deeply shocked”. “I have never hit Miss Heard or any other woman in my life,” the Pirates of the Caribbean star said in a slow, serious tone.

Amber Head’s allegations are, he said, “odious and disturbing” and “based on no kind of truth”, he insisted.

The former couple are actually accusing each other of defamation during this trial, which is being held in Fairfax, near Washington. Johnny Depp had filed a complaint after the publication of a column in the Washington Post in 2018.

The 35-year-old actress did not name Johnny Depp, 58, whom she married in 2015, but mentioned domestic violence.

Johnny Depp is seeking $50 million in damages. Amber Heard, who has also decided to file a defamation complaint against her ex, is claiming 100 million dollars.

Johnny Depp said on Tuesday that he had filed a complaint to “restore the facts”, declaring himself “obsessed with the truth”. “It’s strange how one day you are Cinderella, so to speak, and, in a split second, you are Quasimodo”, lamented the actor who added wanting to “defend (his) children”, exposed to the media on these charges.

From the physical and psychological violence that his mother inflicted on him during his childhood to the consequences that his fame would have had on his private life, the 58-year-old actor testified at length on Tuesday, sometimes seeming to seek his words.

Amber Heard, present in the courtroom, listened carefully and impassively to the story of the man who was her husband for two years.

Addicted to drugs since age 11

Invited by one of his lawyers to discuss his drug use, Johnny Depp told how his addictions began at the age of 11, with painkillers taken by his mother.

“It was to escape the chaotic nature of what we were going through,” confessed the actor who defended himself from having “never been a weirdo who needed to be stoned all the time.”

If he admitted to having been dependent on opiates for several years, before his relationship with Amber Heard, he claimed to have taken these drugs as “self-medication” and to have “never lost control”. 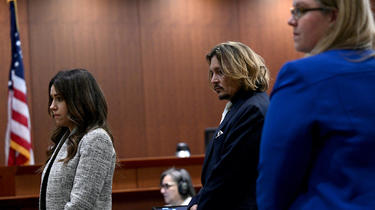 “Miss Heard’s characterization of my so-called drug addiction is grossly exaggerated and, I’m sorry to say, much of it is just plain wrong,” the comedian said.

Last week, lawyers for his ex-wife described Johnny Depp as a “monster” when he drank or took drugs, pushing him into outbursts that culminated in physical and sexual violence.