Kiss was presented this Tuesday, April 19 at the Movistar Arena from Santiago de Chile in the framework of the tour end of the road with which the band says goodbye to the stage after a successful career of 49 years.

Paul “Starchild” Stanley, Gene “Demon” Simmons, Eric “Catman” Singer Y Tommy “Spaceman” Thayer delivered an unforgettable show that, in two hours of presentation, confirmed that when we talk about live shows, the recitals of Kiss fully define what we mean by good Rock.

The group formed in 1973 in the city of New York unfolded on stage Movistar Arena a show made up of a precise repertoire of classic songs.

And as expected, the concert had all the performativity, the huge masses of fire, the characteristic makeup and the fake blood that we all expected to see from Kiss.

Who is in charge of supporting Kiss in Chile?

For the first night the difficult mission of opening the farewell of Kiss in Chile was in the hands of the national band Frank’s White Canvas.

The duo made up of Karin Aguilera on guitar and Francisca “Pancha” Tores on drums it started promptly at 8:00 p.m., and with a powerful proposal that is already known on national stages, as well as in Mexico where they performed at Vive Latino 2022.

Demonstrating experience and making it clear that they are one of the important bands of Chilean rock, the Frank’s White Canvas They took charge of making the first applause of the night appear.

For the show on Wednesday 20, the band will go on stage CATONIwhich is the solo project of Carlos Catoni.

End Of The Road: Kiss Farewell

The tour end of the road began in January 2019 and was delayed due to the pandemic.

Santiago is the first destination in Latin America, since after Chili the Kiss will be featured in Argentina, Brazil, Peru Y Colombia then jump to Europe. Then they will be in Australia to end the tour, and incidentally his career, in the USA the day October 7, 2022.

The two presentations in Chile are part of what was announced as the “final story tour” of Kiss, and for this the band has been in charge of preparing a show that allows them to say goodbye to their fans with height, power and generosity.

That is why on the first day in Chile the members of the Rock and Roll Hall of Fame They reiterated their passion for the performing art with a show in which glam rock is mixed with a complex stage where the most iconic songs of the band shine together with a staging that is constantly in complicity with the public.

The Kiss show in Chile

the concert of Kiss in Santiago It had the particularity of being the first show with full capacity since the pandemic began, and it stood out for its impeccable organization that made every detail work with precision. In addition, the public was up to an event of this magnitude and packed the venue in an orderly manner.

The presentation of Kiss It kicked off at 9:00 p.m. with each of the band members going down to the stage by hydraulic platforms, amid fire and smoke and dressed in the characteristic silver outfit decorated with studs, crystals, spikes and bat wings.

Armed with a career that has endured and adapted to different phases of rock music, the band remains faithful to its roots of shock rock. Spitting talent throughout the performance.

For its part, the list of songs is a precise tribute to his career, focusing on those FM hits that meet the renowned double platinum ballads that appeared on his first albums.

“Beth”, “I Was Made For Loving You” Y “Rock and Roll All Night” of course they are the ones that unleash fanaticism within the concert not only of the Kiss Armybut of everyone who stands in front.

And it is those classics that force the audience to shout, chant and applaud with fervor and with the emotion of knowing that that soundtrack that makes the venue vibrate will never be available live again.

The show within the show

Simmons, Stanley and Thayer they frequently changed places on stage.

One of the most appreciated points is that each of the band members has at least one moment alone with the public.

Tommy Thayer (who came to the band in 2002 to replace Ace Frehley) did so by playing impressive guitar solos that unite the show with the hallmark of classic rock, which are precisely the riffs.

Gene Simmons For his part, he had a good time all the time. He stuck out his tongue, pointed fingers at people, bobbed his head like only Simmons can, threw objects and even went up on a platform that had him rocking high. But he had an unforgettable moment when he was illuminated by ghoulish green lights as he spat out fake blood moments before performing. “God of Thunder”.

After half of the show the main singer, Paul Stanleycrossed “flying” over the heads of the public to end up on a platform in the center of the Movistar Arena and stay in the heart of the overall court to interpret first “Love Gun” and later “I Was Made For Lovin’ You”one of the emblematic songs that was sung loudly by the public.

He then merged with the audience again from the main stage playing the chords of “Black Diamond” and in passing he indicated to the crowd how to sing the three parts of the vocal harmony that was then heard loudly and with improvised passion in every corner of the venue.

Eric Singer he also took over the show with a delightful drum solo, then did it again by sitting down at the piano to perform the classic “Beth.”

Each and every one of them delivered a show that for each one of us who played at being the privileged witnesses of a historical moment, and who in passing were able to enjoy and rock.

Although recently in an interview Gene Simmons said “We’re done”In honor of the truth, it must be said that after seeing them live, it is hard to believe that this will be the last opportunity to have them all together as Kiss.

It is difficult to accept that there is nothing more.

Rarely can you be in the presence of such a particular group of musicians who are capable of sustaining the intensity required by a musical proposal and a performance as complex as the one we were able to witness.

It’s true. It can’t be easy being Kiss and keeping up. It must be very tiring.

“We’re approaching 50 years of doing this, which is amazing because we never thought we’d last more than a few years.”said Simmonswhile we below wonder How is it possible for a band like Kiss to end?

And before that question is precisely “The Demon” Simmons who says: “You have to have some pride and not stay too long. Always keep them looking forward to it.” And so it is… we are left wanting to continue seeing them. 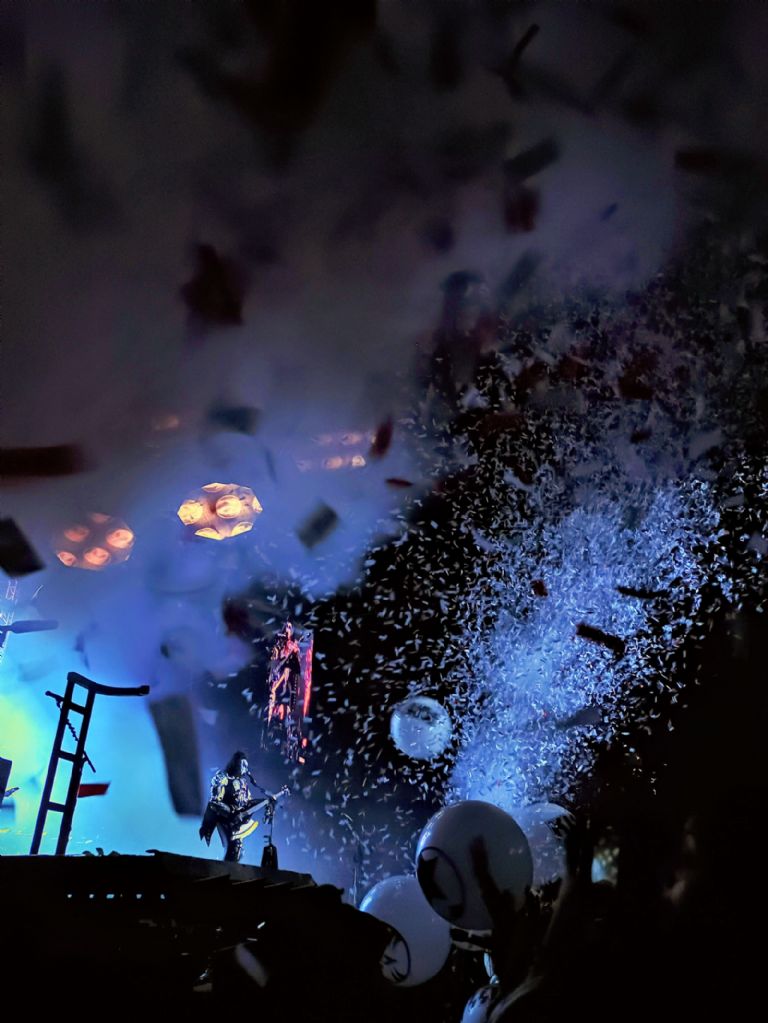 It cannot be denied that when the last chord of Rock And Roll All Night there is a particular emotion because we know that after that song there is nothing else. But despite all the emotions and memories that come to your head, there is really no sadness.

You literally can’t get out of a recital like the one at Kiss with something akin to sadness.

That is why I could not close this chronicle with the feeling that the farewell is a funeral but rather a huge party and a final hug of thanks.

And it is that when there is a group of people who have the crazy and brilliant idea of ​​painting their faces, creating emblematic costumes, spitting fire, calling themselves Kiss and stay half a century on stage making great songs, the only thing we can do is have them close on the playlist and, as a farewell, tell them: Thank you very much for everything, we will continue to listen to you always!

Listen to Rock And Roll All Nite by Kiss