Lin-Manuel Miranda, nominated for Oscar for best original song for “Dos oruguitas”, from the Disney film “Encanto”, announced that as a precaution he will not attend the award ceremony at the Dolby Theater in Los Angeles because his wife, Vanessa Nadal, has been diagnosed with COVID-19.

“This weekend, my wife tested positive for COVID-19. She is fine. The children and I tested negative, but out of an abundance of caution, I will not be going to the Oscars tomorrow night.” Miranda noted on his Twitter account.

“Cheering for my families (from the films) TickTickBoom and Encanto with my own family, along with all of you,” stressed the American actor and musician of Puerto Rican origin.

Miranda is up for the Oscar for the second time after the nomination she got for “How Far I’ll Go”, from “Moana”, in 2017.

On this occasion, the musician was nominated for best original song, for “Dos oruguitas”, a song that is performed by Colombian Sebastián Yatra, in Spanish, for all versions of the film.

Miranda was in charge of writing eight of the songs for the film, including the popular “We Don’t Talk About Bruno”, but it was decided to choose “Dos oruguitas” -in Spanish in all versions of the film- because it better represented the spirit of the movie

“Encanto” will be measured for the Oscar for best soundtrack with “Dune” (whose music has been composed by Hans Zimmer), “Don’t Look Up” (Nicholas Britell), “The Power of the Dog” (Jonny Greenwood) and “Parallel Mothers” (Alberto Iglesias).

‘Enchantment’, more than an animated film 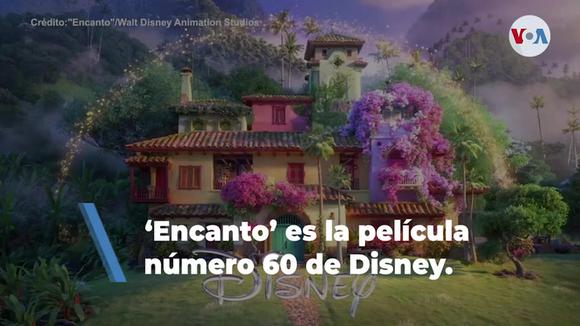 ‘Enchantment’, more than an animated film