At the age of 98 he died louis quesada, one of the artists who marked the cultural identity of Mendoza. It was the Ministry of Culture who announced the sad news from their social networks.

Quesada was born in Santa Rosa on June 23, 1923. He graduated from the UNCuyo Academy of Fine Arts. His works are made up of engravings, polychrome wood sculptures and paintings on cut and painted wood.

In 1955 he founded the Engraving Club with the aim of bringing art to popular diffusion. He also promoted the creation in 1985 of the University Art Museum (MUA) and other private and official institutions dedicated to the promotion and protection of artistic activity.

In addition, he formed a group of muralists that turned Mendoza into one of the cities with the most murals in the country. Among his great works, the frieze of the Municipality of Guaymallén and the murals of the Tonsa Gallery and the Professional Council of Economic Sciences, which have become the heritage of the entire community, also stand out.

In his extensive career he made numerous exhibitions in the country and abroad. He participated in collective exhibitions, salons, contests, and obtained important distinctions.

After the repercussions of what happened, Several referents of local politics expressed their pain on social networks.

“Mendoza bids farewell to an upright artist, a visual creator, academic manager and cultural promoter: thank you for everything Don Luis Quesada. My condolences to his family and friends,” shared the governor of Mendoza Rodolfo Suárez.

For her part, the national senator Anabel Fernández Sagasti said: “Luis Quesada was one of the artists who marked the cultural identity of Mendoza, as well as a benchmark for muralism and visual arts in the region. My condolences to his family and friends.”

“See you always, dear master Luis Quesada, great referent of Mendocino muralism. Thank you for so much art. We accompany family and friends at this time,” said Diego Gareca, Director of Culture and Creative Industries of the Municipality of Godoy Cruz.

“We bid farewell to the great artist from Mendoza, Don Luis Quesada. Here in #Malargüe he left his mark: the beautiful “Monumento al Criancero”; a tribute to our land, culture, landscape and the rural worker from Malargüe. The residents of this department pay him a respectful and deserved tribute”, shared Juan Manuel Ojeda, Mayor of Malargüe. 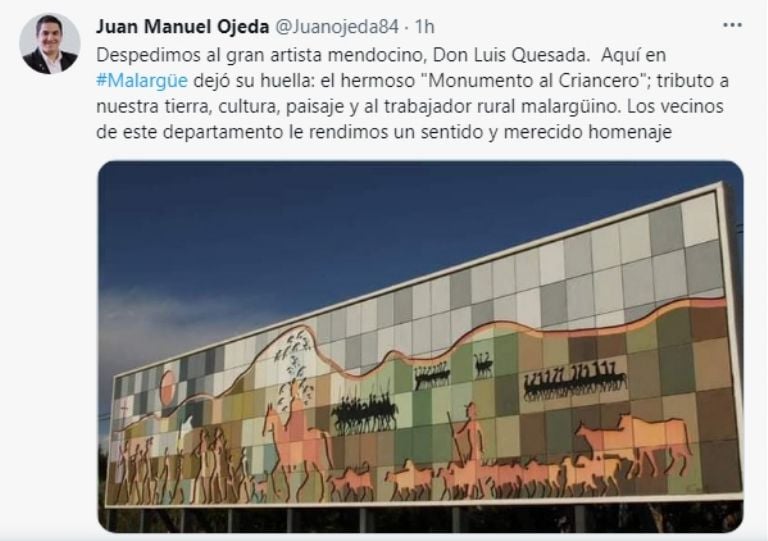