A few hours after marrying Jackson Mora, Tilsa Lozano was captured by the cameras of “Magaly TV: La Firme” in the premises located in Pachacámac where her wedding with the athlete will take place.

The former ‘Avenger’, accompanied by her closest circle, came to the place where the ceremony and the party will take place to supervise the last details in the decoration.

In the images broadcast by the entertainment program, the jury of “El Gran Show” looks quite relaxed drinking a can of beer while walking around the ranch, but a curious detail in her look caught the attention of Magaly Medina.

“Tomorrow she has to put on her dress and she is with her beer in her hand, at least she opens a bottle of champagne, right? Oh and she’s in purple if it had been another time we would have said that it is a subliminal messagebut hey it’s a fashionable color, let’s leave it like that”pointed out the “Urraca” in clear reference to the past romance that Tilsa had with Juan Manuel “Loco” Vargas.

What is known about the mouth of Tilsa Lozano?

The former “Avenger” and the boxer will get married on November 25 in an exclusive venue in Pachacámac that would cost $10,000 to rent.

The party will also have the presence of Paula Arias and Son Tentación, whose cost would have been S/15 thousand for the one-hour show, as revealed by the group’s manager to the Magaly Medina program.

The ATV space also revealed that the influencer and the athlete would spend about $78,000 to celebrate their marriage with the presence of 150 guests, however, the host has denied that she is going to spend this large sum on her wedding.

Jazmín Pinedo reappears LIVE after suffering burns on her face 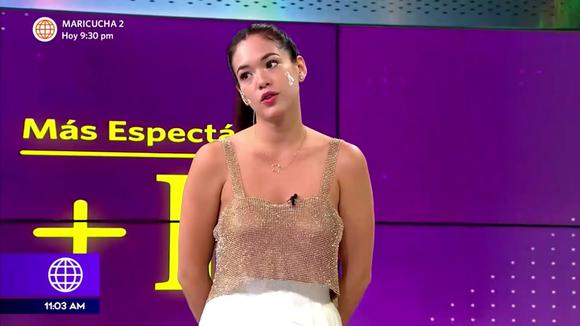 Jazmín Pinedo suffered a burn on her face after applying creams without medication a few days ago. However, today he reappeared on ‘+ Shows’ accompanied by Jaime ‘Choca Mandros’. (Source: America TV)