bad bunny has caused a stir after a recent Instagram live was encouraged to sing a part of the song “Mi bebito fiu fiu”, created by the Peruvian Tito Silva with the voice of Tefi C.

“My baby fiu fiu, I want to be made of chocolate, a pod like that, yes, yes”, He started playing it. She then asked her followers if they had heard her, although most of them said no, in the social networks of Peru she became a trend.

And as a result of this, many have wondered how the issue originated, which is already a sensation on social networks. Coming up next, we tell you.

The issue was born after the Sunday program Panorama broadcast some alleged messages last May that would show that Martín Vizcarra had an extramarital relationship.

According to the screenshots released in the local media, Vizcarra was meeting Zully Pinchi, who was a candidate for congress for the Somos Perú political party, at a hotel.

In one of the messages they exchanged, he sends her a selfie and she replies: “fiuuu, fiuuu”, then he writes: “give me the data, please, it’s my turn now”.

After that, he sends the room number and tells her to introduce herself as Rudy Ramos’ girlfriend. Then she Zully replied: “I love you and I need to give you a hug. You have no idea how much I miss you. You are my baby and my king.” The former president replied: “I love you, see you later”.

The fact caused astonishment and scandal, since the former president of Peru had a stable marriage, as far as was known, with Maribel Díaz Cabello, who is the mother of his four children.

After the alleged conversations between Zully Pinchi and Vizcarra were publicly exposed and a great uproar was generated, Alberto Silva, a music producer popularly known as Tito Silva, created “Mi bebito fiu fiu”.

What is the original song of “Mi baby fiu fiu”?

Many are familiar with the melody of “Mi bebito fiu fiu” and that is because the original theme is that of “Stan” by Eminem and Dido, one of their greatest hits from 2000 that is part of “The Marshall Mathers LP”, the the rapper’s third studio album.

Who is the woman who interprets “Mi baby fiu fiu”?

Tefi C, who is in charge of managing Silva’s social networks, is responsible for interpreting the theme. Also, she appears in the music video posted on YouTube and currently has more than 9 million views.

Martín Vizcarra has not been indifferent to the subject and in one of his broadcasts he referred to it: “We have a number of followers, some very creative like Tito Silva Music; that takes part of our declarations and turns them into topics that are to the liking of the population”.

Salim Vera after insulting Martín Vizcarra for the coronavirus: “A little mockery” 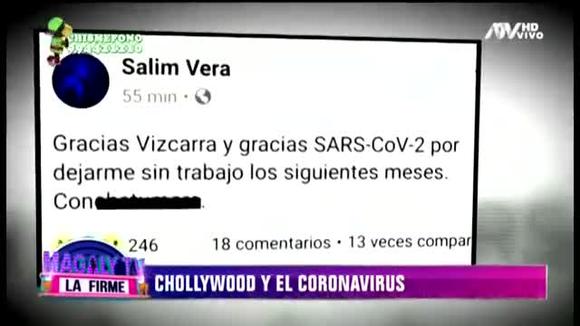 The rocker said he did “nothing against anyone” after insulting the president for “putting him out of a job.”