In search of continuing to conquer the urban music industry, Michelle Soifer He has been recording a feat with the American singer Mariah Angeliq, who is famous for performing “El Makinón” with Karol G.

In addition, at 22 years old, Mariah is also known worldwide for her collaborations with Farruko, Prince Royce, Sebastián Yatra, among others. Even her songs “La Tóxica”, “Perreito” and “Taxi” are very popular on radio and digital platforms.

With this new musical proposal, which promises to be this year’s sensation, Michelille and Mariah are under the command of the well-known producer of the urban genre, Rojas on the Beat, who manages the American label Inzei Records and has worked with stars such as Rauw Alejandro, Lil Pump, among others.

The new song will be recorded with the new label Inzei Monumental, which is the union of the American label with Monumental Music.

Through a video, Angeliq indicated that he had a great time next to Soifer and shut up the critics’ mouths.

“I don’t like to work if there isn’t a good vibe and she (Micheille) gives me a good vibe. We are making good music and I am super happy to make the video. In addition, so that those who speak m … see what happens when two women get together ”, referred.

Meanwhile, producer Rojas on the Beat maintained that he is super excited to have two very good talents from the urban genre.

Let us remember that the American artist, who sounds on the radio and with millions of views on YouTube, arrived in our country for the “Los Reyes del Flow” festival that took place on May 21. She then did not hesitate to accept the proposal for the feat with Michelille.

Micheille Soifer on confrontations with Jazmín Pinedo: “That was when we were chibolas” 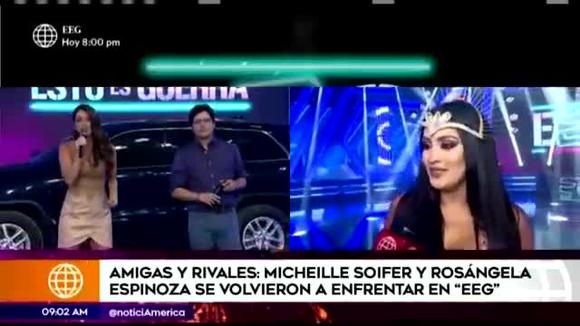