The theme “Mi baby fiu fiu”, created by Tito Silva, has become one of the most successful virals and in recent days it is giving something to talk about because various celebrities have been encouraged to interpret it.

On this occasion, the renowned Spanish youtuber, streamer and presenter Ibai Llanos managed to capture the attention of his fans after he was encouraged to interpret “Mi bebito fiu fiu” in a live broadcast.

In addition, the renowned internet figure had words of praise for the theme of the Peruvian Tito Silva and described it as “fearful”.

As expected, the moment did not go unnoticed by his followers, who quickly viralized the images on social networks.

“Priorities of humanity: origin of the earth, then life and then of course, origin of my baby fiu fiu”, “Ibai? At what time”, “International. Ha, ha, ha”, “They dethroned the tigress of the East”, “My baby fiu fiu new national symbol, national heritage and inevitable in the next military parade”, were some reactions on Twitter.

I was singing my baby fiu fiu, this got out of control pic.twitter.com/JIMnVLF9tA

Days ago, reggaeton Bad Bunny surprised in an Instagram live by singing a part of Tito Silva’s song. “My baby fiu fiu, I want to be made of chocolate, a pod like that, yes, yes”, was the phrase intoned by the Puerto Rican singer and songwriter.

Luisito Comunica, a Mexican content creator, took the time to explain to his fans the origin of the song and also pointed out that the Peruvian producer Tito Silva could have legal problems with Eminem and Dido.

“It’s clearly based on the song ‘Stan.’ A couple of decades ago he released this song with Dido. It’s done, it’s a parody based on this song.” you hear him say.

“The day that the producer starts to monetize directly from the song, either by reproductions, by putting it in festivals, etc. yes, it will be quite a problem, it could be quite a dispute. If it happened to Bad Bunny himself with ‘Safaera’”he indicated. 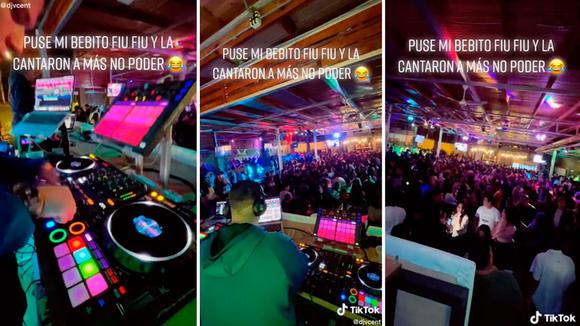 DJ Vcent has gone viral on social networks in recent days after posting a video when at an event he makes a peculiar transition from an electronic music theme with “Mi Bebito Fiu Fiu”, a well-known remix by Tito Silva Music. The reaction of the public was automatic and they sang it out loud. (Source: @djvcent)