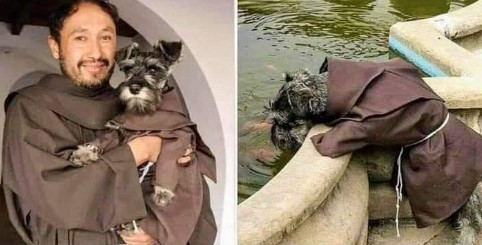 In 2017 a tender story moved the world, it was about a small schnauzer who was adopted by a group of Franciscan monks and that it turned famous for wearing a peculiar tailored attire like that of its religious owners.

But it was almost five years later that Friar Whiskers went viral once again on social media, Well, users who had never seen it were surprised to see the curious photos of the puppy and its life in the convent located in Bolivia.

It all started in Twitter, where an Internet user identified as Tomás @ CorVi_0070 took up the story of the dog and quickly had a lot of reach.

“After being abandoned by his family, this puppy was adopted by these Franciscan monks and lives with them in their community, he became ‘Fray Bigotes’”, placed in the tweet that reached more than 97 thousand likes. 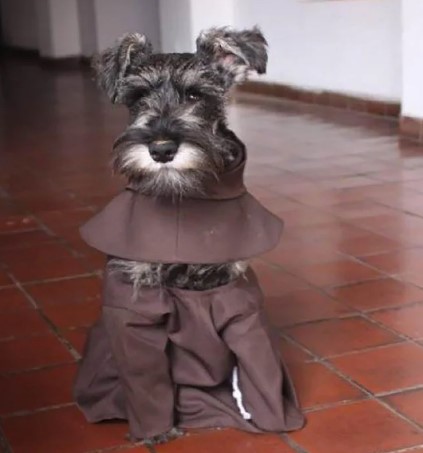 In the shared images you can see the puppy with a brown habit and accompanied by those who rescued him.

Given this, the reactions from Internet users were immediate and several of them made all kinds of encouraging comments towards the dog.

“And me thinking he was a Jedi.” “The true Franciscan movement”. “Come on son, come on, give your hearts to the Lord Almighty.” “I want to be that dog”were some of the mentions that appeared on social networks. 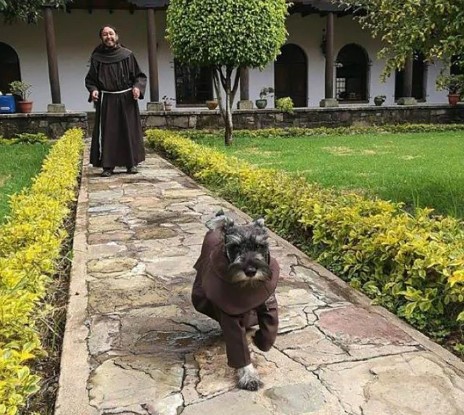 Although the little schnauzer is known as Friar Whiskers your real name is Friar Carmelo and before living with the religious, he spent his days in a canine shelter in Bolivia after he was found on the streets, wandering aimlessly.

It was thus that a group of friars from the convent of San Francisco, in Cochabamba, was looking for a puppy that would radiate the corridors with joy and, Suddenly they met Carmelo.

The Franciscans, because of the patron saint who identifies them, have a special bond with animals. Saint Francis of Assisi was named the patron saint of animals, veterinarians and environmentalists. Around his figure, there are hundreds of anecdotes that show his empathy. One legend, for example, says that the swallows followed him with devotion and formed a cross over his head. 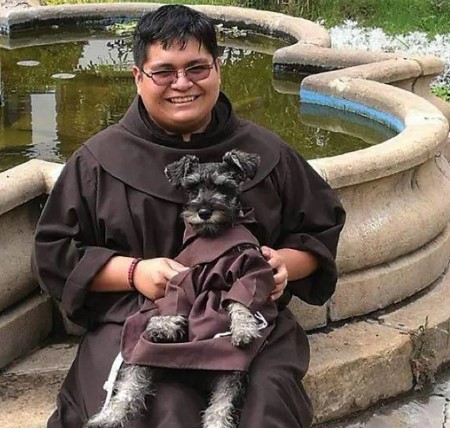 Given this context, it was that the Bolivian monks followed the message of San Francisco and, therefore, adopted Carmelo. A few days later, they decided to baptize him with a particular name: Fray Bigotes. His relationship with religion did not end there. The brown cassock in which he was dressed made him a celebrity on social networks.

“The dog has all the space he could want to play and run freely. Also He has a fountain to drink and refresh himself whenever he wants”, commented one of the brothers.

Fray Bigotón took the habit of the Franciscan order. Jorge Fernández, one of the fathers of the monastery, said: “His life is summed up in playing and running. He has no obligations of any kind. Here, all the brothers love him very much. Now he is a creature of God.”

Beyond not having obligations, Fray Bigotón does serve as an example. The Cold Nose Project of Bolivia was in charge of rescuing him when he was still called Carmelo.

Young French people believed that social networks do not exist in Mexico and their teacher reacted: “Do I live under the stones?”
Polish father made a mistake during mass and asked parishioners to say “I have it hard, my life” instead of “Life is hard”
Japanese woman goes to a pulque restaurant in Mexico City and is surprised: “There are many drunks”
Woman sang Gloria Trevi’s song outside her concert and they viralized it: “She sounds hurt, but from her voice”