In an excellent year that saw the reopening of movie theaters with blockbusters and a greater number of quality films released on streaming platforms, ten productions compete for the Oscar for Best Film.

The list presented to the members of the Academy for their vote includes a dark western, a Japanese duel and an epic work of science fiction. These are the films that compete for the top prize in Hollywood this Sunday.

– “Love Without Barriers (West Side Story)” –

Steven Spielberg’s decision to work on a new version of the most awarded musical of all time was controversial. Even after “Love Without Barriers” garnered rave reviews upon its release, some critics questioned the effort. Spielberg maintained the atmosphere of 1950s New York in which the original plot takes place, dealing with a love story pitting rival gangs against each other, but also addressing issues of representation, including a diverse cast and extensive dialogue in Spanish. . Ariana DeBose’s performance as Anita garnered recognition for supporting actress status, and while she doesn’t seem close to winning the night’s biggest award, Spielberg is so revered in Hollywood that nothing can be ruled out.

The shortest and most personal on the list, Kenneth Branagh’s semi-autobiographical film has long positioned itself as a strong contender in the Oscar race. He shows the outbreak of violence in the 1960s in his native Northern Ireland from a different perspective: that of a nine-year-old boy. Buddy (Jude Hill) struggles to make sense of his life-altering street events in a familiar, working-class neighborhood, but he’s sure of one thing: he doesn’t want to leave the only home he knows. “Belfast” won several awards this season, but may have lost some of its early momentum.

Another intimate and familiar look focuses on teenage Ruby (Emilia Jones), the only one in her family who is not deaf. The Rossis live in a small fishing community in Massachusetts, USA. The film, whose cast has deaf actors to play the leading roles and developed a good part of the dialogues in sign language, is considered a milestone of inclusion. But it also touches on emotional themes, with the family’s struggle to support Ruby, torn between leaving home to follow her dream of being a singer, and helping them communicate with the outside world. “CODA” became one of the favorites last month by winning recognition from the United States Actors Guild, an award that is considered a thermometer in the race for the Oscar. This victory placed her as one of the competitors with the most chances of winning. to the great favorite, “The power of the dog”.

At two hours and 59 minutes, the Japanese drama is the longest nominated film. The production is a slow, subtle meditation on grief and loss, adapted from a short story by writer Haruki Murakami. Two years after the success of South Korea’s “Parasite” proved that subtitles were no longer an obstacle, “Drive My Car” was applauded by moviegoers and won dozens of critics’ awards. With more chances to win as best foreign film, winning the Oscar would be the surprise of the night.

Denis Villeneuve’s sci-fi epic grossed $400 million at the box office, nearly double the $220 million earned by the other nine nominees…combined. An adaptation of the first part of Frank Herbert’s novel , which imagines noble families on a planet plagued by giant sandworms, the production gained popularity with critics and has confirmed a sequel. But its awards season success has been limited to technical categories such as visual effects, sound and photography. Thus, the night can end without the Oscar for best film but with several statuettes.

A full-fledged author’s work, it is a macabre circus fable about a supposed fortune-teller who tries to deceive wealthy clients. The film noir by Mexican Guillermo del Toro, which captivates the audience with its fascinating production design, hardly reaches the achievements of his previous “The Shape of Water”, with which he won Hollywood’s highest award.

Since its lavish world premiere at the Venice Film Festival in September, Jane Campion’s western has become a favourite. The film, an adaptation of Thomas Savage’s novel about toxic masculinity in the American West in the 1920s, leads the Oscar competition with the most nominations (12), and has swept nearly every award show. of the Hollywood season. Bringing together Campion’s distinctive vision, an all-star cast led by Benedict Cumberbatch, a bleak psychological plot, and stunning photography thanks to the New Zealand locations where it was filmed, the film ticks several of the traditional boxes that the category of best film demands. film. But its slow pace, which has alienated members of the Academy, and a voting system that favors universally enjoyed films, mean that there are still doubts about its ability to win the night’s top prize.

Set in the 1970s Los Angeles suburb where its director, Paul Thomas Anderson, grew up, it is a nostalgic film featuring an unlikely relationship between an untimely woman in her 20s and a bold and confident teenager. Anderson, the writer-director behind such hits as “Bloody Oil” and “Boogie Nights,” has built a remarkable career in Hollywood. In “Licorice Pizza,” made up of a series of moments that capture the zeitgeist, Anderson captivated audiences and earned rave reviews, but even his fans agree that it’s not the best of his repertoire.

The satirical comedy has more stars in its cast than any other nominee for the 94th Academy Awards. Leonardo DiCaprio, Meryl Streep, Jennifer Lawrence, Timothée Chalamet and Ariana Grande are some of the figures facing the end of the world as a huge comet approaches Earth, in a deliberate allegory of the climate crisis. “Don’t Look Up” is one of the most-watched Netflix movies in the platform’s history, but its political tone divided audiences and critics.

Combining the incredible story of sisters Venus and Serena Williams with the talents of superstar Will Smith, “King Richard: A Winning Family” is an inspiring production that connected with audiences and garnered strong reviews. Smith plays the ambitious father of two future tennis powerhouses in this tale of family dynamics that manages to avoid many of the clichés seen in sports and biographical films. If Smith doesn’t win the Oscar for best actor, he would still be in contention for best picture.

Tula Rodríguez and her “promise” if Peru wins in Uruguay 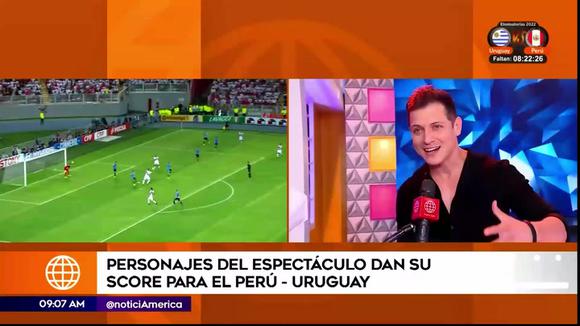 Celebrities give their score for Peru vs Uruguay https://www.americatv.com.pe/noticias/