Paula, daughter of Mariana Levy, issued a statement on social networks after different Mexican media pointed out that she denounced her boyfriend Mau Moctezuma for physical aggression.

Through her public message, the young woman pointed out that she was a victim of violence, but that episode was with a former sentimental partner, whose name she will not reveal.

“I feel like I have to clear this up now. 3 years ago I was the victim of violence by a person I dated and who I am not going to mention yet due to the legal process. Years ago I uploaded a post showing the blows that he gave me at the time and I deleted it later. This person got angry and started threatening to share some of my videos. He has been harassing me for years from different Instagram accounts and in one of his threats he said that he was going to end my relationship with Mau ”, Paula explained.

“On Monday (May 2) I see that they take out in the gossip media the photos I took when he (his ex-partner) hit me, but edited… I know that person (his aggressor) sent all that to harm my relationship ”, clarified.

Paula Levy said that she will not reveal the name of her attacker and that she will continue to have a relationship with the musician Mau Moctezumawith whom she currently lives after leaving her grandmother’s house, former driver Talina Fernández.

“I want to make it clear to all the media that I am fine with my boyfriend. Mau has never been a violent person and much less did I file a complaint against him. He is supporting me like never before in this whole process and it gives me peace to feel accompanied by him”, concluded. 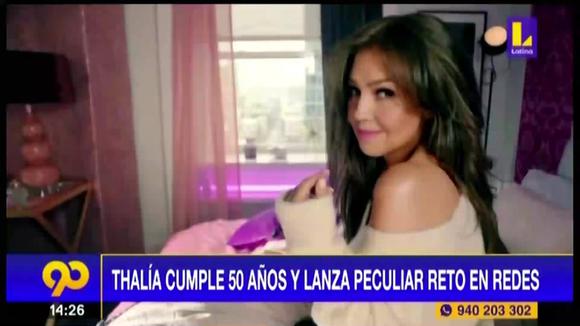 The popular Mexican actress and singer Thalía turns 50 today and decided to celebrate it with her more than 18 million followers on Instagram with a peculiar challenge with teddy bears. (Source: Latin TV)