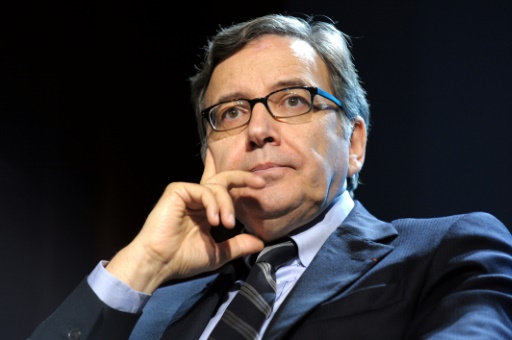 The former boss of TF1 Nonce Paolini in Paris on June 25, 2012ERIC PIERMONT

The former boss of TF1 Nonce Paolini understands “the suffering” of the women who accuse the ex-presenter Patrick Poivre d’Arvor of sexual assault and rape, and claims not to have been aware at the time of the alleged facts, in a program broadcast Tuesday evening by Mediapart.

“I want to tell them that their suffering cannot leave anyone indifferent and in particular me, neither as a man nor as a former leader”, he declares as part of a program which brings together in an unprecedented way 20 women who have testified before justice against PPDA.

“I hope they can obtain the possibility of their case being reviewed by the courts”, continues Mr. Paolini, who speaks for the first time since the launch of the case in February 2021. The alleged facts are range from the 1980s to the 2000s.

At the time, “obviously we did not know. If we had known, we would have taken the necessary measures and me first”, adds Mr. Paolini.

If this had been known, “sanctions would have been taken”, he says. “You couldn’t question the reputation of a company like that, listed on the stock exchange, listed on the CAC 40. It was an inconsiderate risk,” he said.

“It’s not a system that needs to be denounced. There is no system, there is simply someone who has behaved in an odious way with women in different contexts without anyone being able to do so. know since these women did not express themselves”, added Mr. Paolini.

Mediapart underlines that “Patrick Poivre d’Arvor did not respond” to his request for an interview “under conditions similar to those offered” to the witnesses.

He “contests any violence, sexual or not, against the women who accused him”, according to the words of his lawyer reported by the online investigation site.

Reactions were numerous on Tuesday evening on social networks in the wake of the broadcast of the special program on the Médiapart site.

“It’s time to listen, to believe and to stop these classifications without follow-up for insufficient evidence when the aggressor denies because those always deny”, challenged the actress and director Andrea Bescond on Instagram while Florence Foresti greeted the “power” of “this image of women, united, united, together against violence”.

Seventeen women filed a complaint against PPDA, including eight for rape. Sixteen of them, whose complaints were closed in June for prescription, are currently the subject of a PPDA complaint for “slanderous denunciation”.

A judicial investigation is underway in Nanterre following the complaint with civil action by journalist Florence Porcel who broke the case in February 2021. At the same time, the prosecution is conducting another investigation into three other complaints.

In total, at least 27 women testified against PPDA in the press or in court, including two minors at the time of the alleged events.