Erika Villalobos He reappeared on television in an interview for “Arriba Mi Gente”. The person in charge of talking with the actress was Gianella Neyra, her great friend and former co-worker of hers in different national productions, who is the host of the recently released Latina magazine.

Thus, after the images of the conversation between the two were broadcast, in which Cristian Rivero’s partner was very respectful and did not ask him any questions about Aldo Miyashiro’s ampay with Fiorella Retiz, which occurred a little over a week ago, Santi Lesmes gave his opinion on the subject.

And it is that the Spaniard, who is another of the presenters of the space, disagreed with Karina Borrero, who before him, praised Villalobos’s attitude in front of the camera, because according to her criteria, she as an actress could show herself more like “nothing happened here”in reference to the images of her still husband kissing the reporter.

“Seeing Érika, because the interview was to promote her work, she is an actress and (could) change the energy (…) But I have seen a completely hurt Érika, sad from beginning to end. It’s not for honesty the normal thing would have been to stand in front of the camera because it’s work, but the pain he’s in so much right now that he can’t “, assured.

Neyra showed her rejection of Lesmes’ statements and said: “You don’t have to… What is behind we all know, she knows that we all know, so she is there, setting a precedent, saying: ‘Here I am, this is what I am, with the pain I have, looking forward’”.

Finally, Santi specified that Erika “He has left us, in that sincerity, some little things. Because, for example, when she talks about the play, those kinds of comments like: ‘Well, not everyone comes back’, which you can tell that they come out fresh at the moment, without thinking about it, they let you see the situation they are experiencing”. 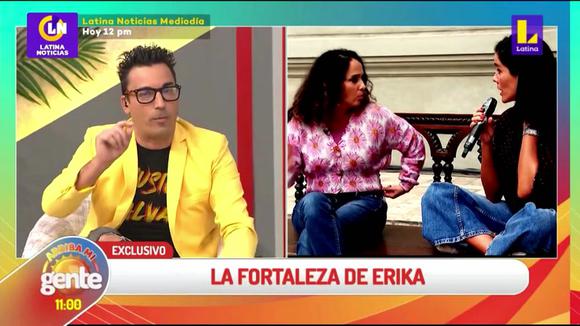 Érika Villalobos on the death of her father https://www.latina.pe/noticias