American actor and film director Sean Penn signed this Wednesday with the city council of Krakow (south) an agreement to sponsor the installation of a training center for assistants to Ukrainian refugees in Poland.

The project, which will be carried out through the foundation headed by Penn, includes specialization courses for social workers who are going to carry out their work with refugees and the rehabilitation of several social houses that the Krakow city council has allocated to family accommodation ukrainian

The organization CORE (Community Organized Relief Efforts) was founded by the winner of two Oscars from the Hollywood Film Academy in 2010 with the aim of helping the victims of the earthquake that devastated Haiti that year.

“We are facing a crisis situation that no government is capable of dealing with on its own,” declared Sean Penn at a press conference in Krakow. “We have acted in similar situations before and that is why we are expanding the network of cooperation with our experts and now trying to establish an equal network in Poland,” he added.

At the press conference with the mayor of Krakow, Jacek Majchrowski, Penn was “convinced that in this situation the public and private sectors must act together”, words that the Polish mayor subscribed to and described as “from a friend”.

The Penn-led charitable foundation distinguishes itself by providing ongoing, long-term help in the areas where it operates, providing specialized training to local staff and trying to rebuild communities affected by disasters or emergencies.

The actor traveled to Ukraine in February to shoot a documentary about the invasion that the country has suffered since last February 24 by Russian troops.

The actor and director already visited that country in November 2021 for the first time to prepare that documentary, in the midst of tensions between Ukraine and Russia, and it is not the first time that he has been involved in humanitarian operations or has given his opinion on political conflicts. .

According to the Polish authorities, since the invasion of Ukraine began, some 2.2 million refugees have arrived in Poland, making this country the main recipient of those displaced by the war.

For several days now, large Polish cities, such as Warsaw or Krakow, have made an international appeal for help to enable them to cope with the massive influx of refugees, which has increased their respective populations by 15% in just three weeks. . 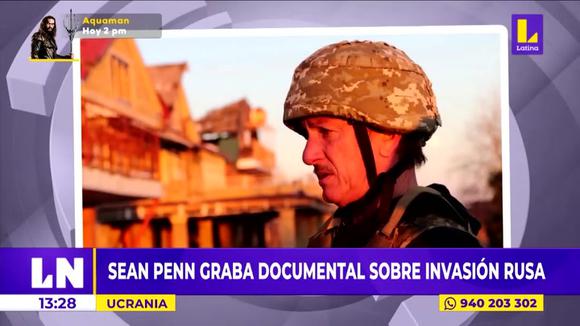 Actor Sean Penn traveled to Ukraine to record a documentary and ended up escaping to Poland https://www.latina.pe/noticias