After knowing that Shakira and Gerard Piqué decided to put an end to their relationship due to an alleged infidelity of the FC Barcelona footballer, an infinity of rumors have arisen around the ex-partner.

It all started a week ago, when the Colombian announced through a brief statement that her relationship with Gerard Piqué had come to an end. From that moment on, users of social networks have been attentive to all the movements of the singer on her social networks, and one of the ones that attracted the most attention It is the “follow” that Chris Evans, the actor who plays Captain America, gave to the Colombian on Instagram.

The fact caused a great sensation on social networks, especially on Twitter, where users began to generate all kinds of rumors and theories.

“Piqué and Shakira is already history, now she has to choose between Chris Evans and Henry Cavill”, “Chris Evans said: the one who left for Barranquilla, lost his chair”, are just some of the reactions that can be read on TW.

Many highlighted that the actor’s interest in the singer was more than evident, since the popular “Captain America” ​​only follows 211 people on Instagram. Most of them are Marvel actors and castmates, with few people related to the musical field.

What is true in the rumours? Chris Evans responded like this:

Last Wednesday, Chris Evans had a meeting with the press at the El Capitan Theater in Hollywood, California, and as expected, they did not miss the opportunity to ask him about the rumors.

“Shakira started following you on social media and the internet went crazy! Have you met her yet?” asked the journalist from the Univision channel Evans.

“No, no, I’ve never met her, but I’m a big fan,” “Captain America” ​​replied, one of the superheroes that fans postulated to rescue the heart of the artist from Barranquilla.

“Oh, God, I would be very ashamed to be by her side, she is too good at doing that,” added the actor when asked if he would participate in a video with Shakira, moving his hips.

Oscar 2019: Chris Evans and his kind gesture with Regina King at the gala 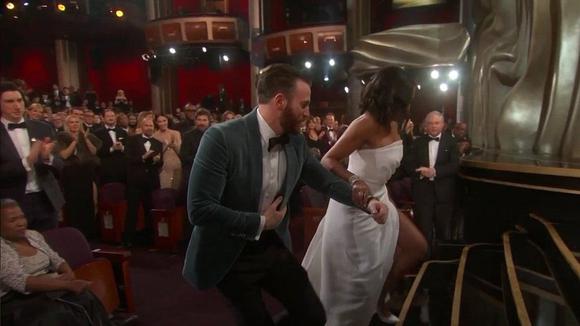 Oscar 2019: Chris Evans and his kind gesture with Regina King at the gala | VIDEO