With much anticipation, Tini Stoessel gave her first show at the Palermo Hippodrome this Friday after the suspension of a series of dates in March due to the delicate health condition that her father went through. However, the happiness of the singer’s fans crashed against a series of inconveniences in the organization of the show, and the complaint of a follower went viral, who, like other people, asks for the money for the ticket to be returned.

“The worst I experienced in my life. Bad organization from the moment one. The doors had to open at 7:00 p.m. and ended up opening later, so by 9:00 p.m., when the recital was supposed to start, HE DID NOT DO IT”, the user began against the organization of the show of Tini Stoessel. 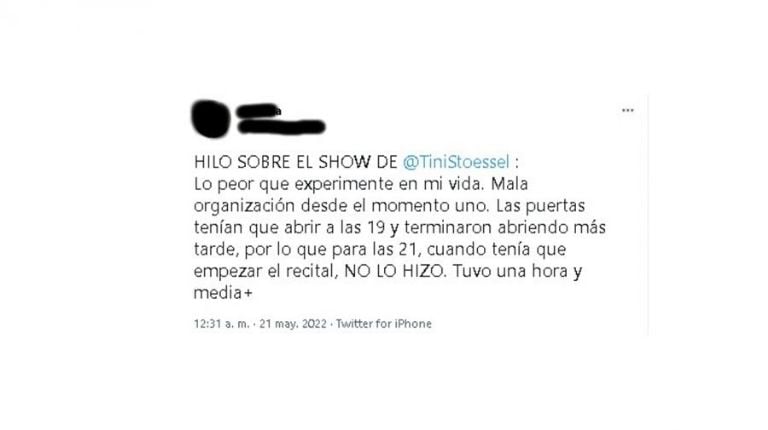 In her disclaimer, this viewer added: “He had an hour and a half delay because there were six blocks of queue of people who had to enter. The field was behind everything and everything in front full of chairs. We were waiting since three in the afternoon to enter and when the show finally started, EVERYONE STOOD UP ON THE CHAIR so that all the people who were in the field did not see ANYTHING OF THE SHOW”.

With greater indignation, the woman continued pointing against the organization of the spectacle of Tini Stoessel. “We started shouting for them to get down, we asked those on the fence to please do something, and yet they said they couldn’t do anything. The people in front of us heard us screaming, turning around and laughing when they saw that we couldn’t even see the screens. NOBODY DID ANYTHING“, She complained.

In addition, the viewer remarked: “The last four songs, finally, we managed to make them feel (and not thanks to the production or any message from Tiny) and when the end came, they went back up. We could not see anything at all, everyone cried in desperation because many people, in addition to paying the entrance, TRAVELED AND PAID FOR HOTEL, among other expenses that arise among other situations”. 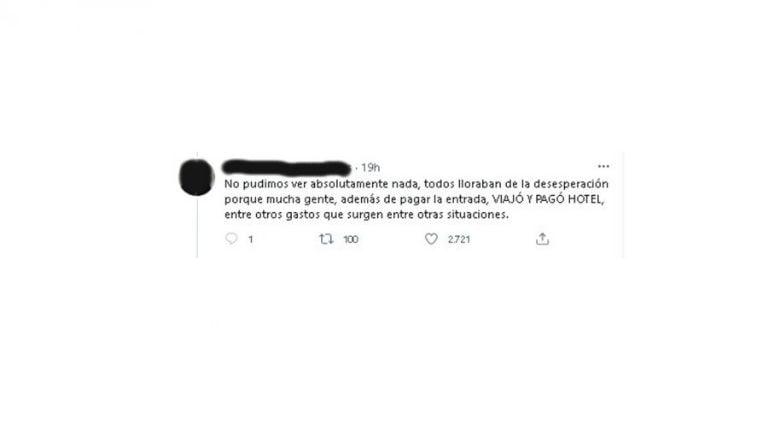 On the other hand, the viewer claimed: “It seems to me that the least they can do is give a refund for a show that we basically DID NOT SEE @AllAccess @Tini Stoessel”.

Finally, the fan of Tini Stoessel sentenced: “We don’t know which guests were there because we didn’t see them, not Tini or whoever was actually up there. May this also serve for those who go to the next shows in the field to become psyched or, hopefully, the production REACHES A SOLUTION. So many preparations for an event that you wait so long and that you want to enjoy to end it this way. Tiny divine queen tremendous show, but the organization sucks… and that never happened to me in other recitals going to the field too”.