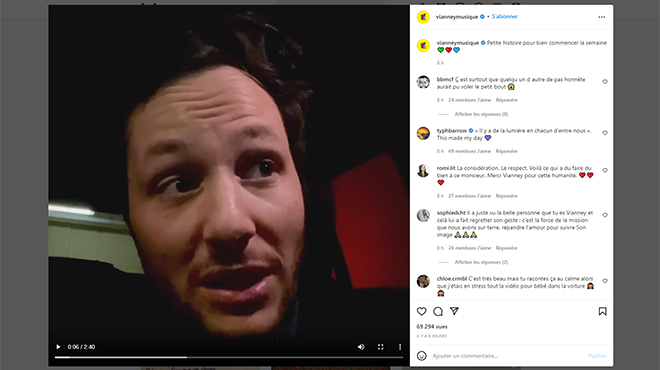 This Monday, March 21, Vianney shared on his Instagram account a story he experienced with his son and which could have gone wrong. The singer was upset by this meeting. Vianney posted a video on his Instagram account on Monday March 21 to tell a surprising scene. “Hey guys, just got back from touring. I came home this morning so I’m exhausted because we did three concerts which were very intense“, begins the artist.

“We spend crazy evenings and afterwards, it takes me days to recover. Today is a day like this where I had to get over it and something crazy happened to me, I wanted to share it with you“.

Vianney then says that he met friends during this day of family rest in Paris. “So I parked the car that I left open since, to tell you the truth, there was my little baby who was sleeping“. The singer, in the middle of a discussion, was a few meters from his car in order to keep a eye on his sleeping son.

It was then that a man approached the vehicle, the latter was “glued to the car“, he “was a bit strange, not very clean on him“.

“I think he had to struggle on the streets for a few days or at least who had to ‘misery‘“. The father, a little worried, asked the stranger if everything was okay, but the man did not answer.

Vianney then opened the doors of his vehicle. The individual then told him a surprising thing…“Bro, I’m sorry, I stole everything from your car“, dropped the man. He then returned everything he had stolen.

“He told me : ‘It was open and I don’t know, I’m sorry, I’m asking you sorry’ and he gave me back everything that was in that car, not much by the way“, specified the interpreter of Not there.

“Good sure, the baby is fine. I kept an eye on his door, but obviously, this gentleman entered from the other side of the vehicle, discreetly…“.

“Still, it upset me. I don’t know what made him go back on his gesture, maybe just because we actually looked at him, I don’t know. In any case, it just means one thing, it’s that there is still light in everyone. There is good in everyone“.

According to Vianney, this man “saw a human and he regretted his gesture“. “This guy, he brought me a lot of light out of the blue“, confides the singer. However, he advised his followers to shut down their cars, “it is important“.