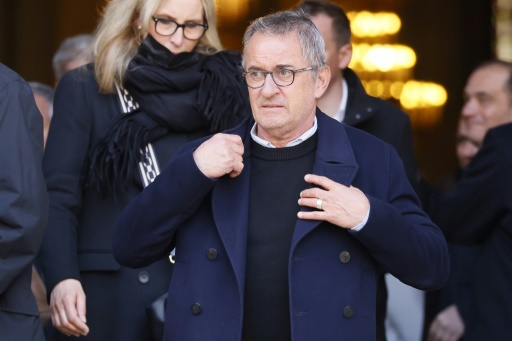 Christophe Dechavanne on March 9, 2022 in Paris during the funeral of Jean-Pierre PernautThomas SAMSON

“See you soon to be 65, I’m starting a new adventure,” enthused Christophe Dechavanne on Wednesday, who will return to the fore on television as Léa Salamé’s right-hand man in a talk show scheduled for Saturday evening on France 2 from of September 24.

This proposal was “totally unexpected”, assured the host during the online press conference for the presentation of the show.

Before that, “without any bitterness, I told myself that the case was a little bent as far as I was concerned”, continued Christophe Dechavanne, at the head of cult programs in the 90s, such as “Ciel mon mardi !” or “Hi, it’s us!”.

“Léa is going to present the show, Léa is the boss”, insisted the one who is qualified by the channel as “permanent guest” of this program entitled “Quelle époque!”

“Christophe Dechavanne is not + columnist +, he is a star”, for his part underlined Léa Salamé, according to whom the choice of this new partner was natural.

His role will be to give his view of the current era, which leaves him “cautious”.

“I’m going to be a man of my age, with the feeling that I have” about the time, he said, promising “some bullshit”, to be “super schoolboy” and to highlight “things that make (him) angry”.

He will be able to intervene at any time and will receive a guest each week.

More broadly, this talk show will operate on a “mix of genres” by receiving “7 or 8” outstanding personalities from cultural, societal, political or media news, in real life as on social networks, according to Léa Salamé.

“We are testing things, there will be columnists,” said the host, according to which a pilot will be shot in mid-September.

The duet with Dechavanne will in fact be a trio since comedian Philippe Caverivière will also be on the show.

Star of the morning of France Inter radio, Léa Salamé finds herself alone at the controls of the Saturday evening program on France 2, after having co-hosted with Laurent Ruquier “We are live”.

In June, the latter had announced his departure, “not being comfortable in co-hosting”. “Despite my natural understanding with Léa Salamé, I find the exercise too frustrating,” he explained on Twitter.

“I did not feel this frustration”, but “I can understand (it)”, commented Léa Salamé.