The ex-combatant of ‘This is war’, Allison Pastor proved to be more in love than ever with her husband, actor Erick Elera, with whom she has a son and has been married for six years. She called the actor “perfect.”

“I tell you the truth, when I met him several told me many things about him, but when I decided to give him the opportunity (laughs) I met a different person. He loves being at home, being with his family, imagine, I have seven sisters-in-law, he loves being with his sisters, with his daughter Flavia, of course, she is with her mom now in the United States, but when she comes she is with us. Erick is a hermit, he doesn’t like parties, he doesn’t drink, that’s why I say he’s perfect, he shut up many who talked so much about him, for me he’s A1 both as a husband, father and friend”, Allison Pastor said in an exclusive interview for the Trome newspaper.

“(About Elera’s past) We all make mistakes, but the important thing is to learn from these situations and perhaps he will have gone through things with his previous partners that have led him to mature and that has made his life more stable and calm now. In addition, we have both decided to be together until ‘raisins’”, he added.

The ex-combatant revealed that in the past she was a fan of ‘Al fondo hay lugar’, especially the character ‘Joel González’, but she never imagined marrying the actor who played him.

“I’ve told him, now that he’s back with ‘In the background there’s room’, that I’m not going to be able to walk in the street with him. I was a fan of ‘Joel’ and I never imagined marrying his interpreter and having children. For me it is a blessing to have the family that I have formed with Erick, next to Flavia and Lucas”, he acknowledged.

Allison Pastor revealed that they are thinking of increasing the family. They hope to have two girls in the future. Pastor, 26, prefers to turn 30 so he can have her second child. In addition, he hopes to make a full recovery from his knee operation.

“I tell him (Erick) that we have to wait to order because I’m just recovering from my knee operation. He is dying to increase the family, but we have to wait for the gym and other projects we have in mind to be consolidated. God willing, this year we open a restaurant”, he counted.

He rules out working with Gisela Valcárcel

The young businesswoman assured that she would love to dance again and also teach karate classes, but ruled out working again with the television host, Gisela Valcárcel, after resigning from “Reinas del show” in August 2021.

“No (I would return to work with Gisela Valcárcel). It was a beautiful experience and it lasted as long as it had to last, now that Tinelli calls me”, he sentenced.

Yahaira Plasencia on her presentation in Colombia 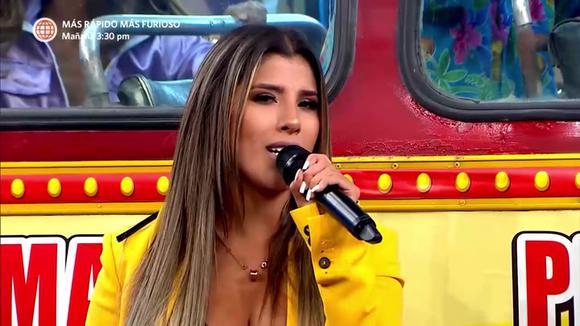 Yahaira Plasencia on her presentation in Colombia