The return of “There is room in the background” has managed to capture the attention of all his followers with a story that combines humor and drama. After showing the life of the Gonzales family with Francesca Maldini, the series will continue to explore the new directions that the funny protagonists will take.

Through the social networks of América Televisión, a new preview of the second episode of the series was released, where it will be seen that the Gonzales family continues to enjoy the benefits of sharing the wealth of the Maldini matriarch.

While ‘Pepe’ and ‘Tito’ ask for a beer delivery, ‘Charito’ looks for his family to reflect; however, in the middle of his speech, ‘Joel’ interrupts to announce that they will have a party on a yacht.

“THE NEW PITUCOS! How lucky for the Gonzales, luxury gifts, free food, drink and housing NO LONGER! And now they will have a yacht ride, will the socialite accept them? and above all they will listen to Charito’s advice “says the message that accompanies the promotion.

How was the last episode of the eighth season of “There is room in the background”?

The last episode of the eighth season of the series “In the background there is room” ends with the demolition of the iconic house of ‘Los Gonzales’ and at the request of Miguel Ignacio De Las Casas (Sergio Galliani).

Having no home, ‘Los Gonzales’ move to a human settlement and still maintain their family union, despite adversity. While Francesca Maldini (Yvonne Frayssinet) is left alone in her mansion in Las Lomas.

In the midst of her loneliness, the matriarch of ‘Los Maldini’ asks Peter (Adolfo Chuiman) to locate ‘Los Gonzales’ so that he invites them to live with her in his mansion and thus find the family warmth that he so longs for.

Thus, in the last chapter of “In the background there is room” it is shown how ‘Los Gonzales’ return to Las Lomas to live in Francesca Maldini’s mansion, the home where they were always rejected. 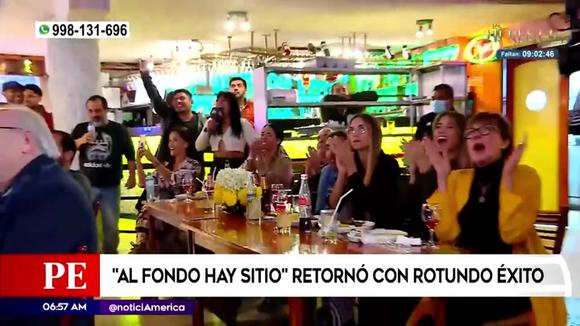