In a recent edition of “Magaly TV, the firm”, Medina presented in a report images of the actors Érika Villalobos and Aldo Miyashiro in Argentina, the country to which the host of “La banda del Chino” traveled to present his new play called “Faca”, in which, in addition, the renowned Peruvian artist was in the front row supporting him in the company of his children on the emblematic Corrientes street in Buenos Aires. This surprised the public because several months ago “Chino” was supported by kissing with Fiorella Retiz, which caused the separation of the couple. Aldo Miyashiro and Fiorella Retiz were caught together while the driver was still married to Érika Villalobos. Photo: Composition LR/America TV/ATV/YouTube

What did Magaly Medina say about Érika and Aldo Miyashiro?

“We don’t know if the relationship between Érika Villalobos and Aldo Miyashiro is so good that they share with their children for their own good or if they are on the way to a reconciliation, we don’t know,” Magaly said about the images she presented during the broadcast of her broadcast. TV, because they were not seen together as such, but they would have shared as a family.

Since when were Érika Villalobos and Aldo Miyashiro in Argentina?

According to what was revealed on “Magaly TV, the firm”, the actress caught up with the driver of “La banda del Chino” in Argentina on December 29. There they would have spent the family holidays, although with a low profile.

In the same way, Villalobos was observed very happy in the new play by Aldo Miyashiro, but she left alone, staying away from the actor as well. The reconciliation is not yet confirmed.

“Well, when I was on the Aldo Miyashiro show, but the show wasn’t the worst, they sent us to the office,” said the comic actress in an interview with Katty Villalobos. “Our schedule was from Monday to Friday, from 11 in the morning to 5 in the afternoon, and from there we had to fly to work, which was at night. What I didn’t like was office hours. I am from people who have to be more active, from here to there. Being in the office… for me, it was like being trapped,” she added. 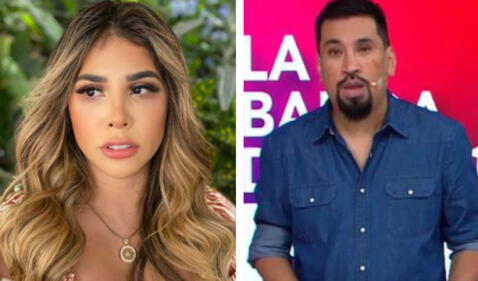 Gabriela Serpa and Aldo Miyashiro worked together when the program was broadcast on Panamericana. Photo: diffusion