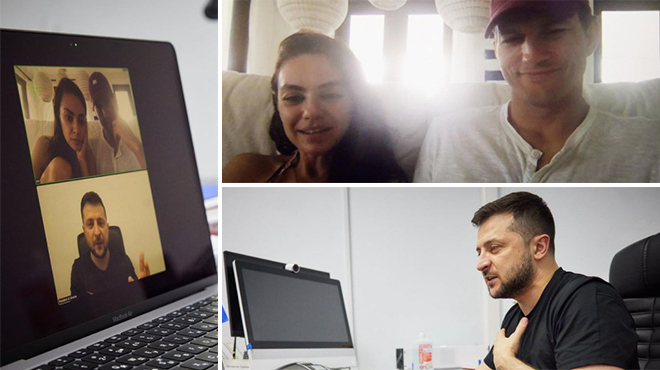 Volodymyr Zelensky hosted a video call with Ukraine-born Mila Kunis and her husband Ashton Kutcher to thank them for raising over $35 million for the victims of the Russian invasion.

The Ukrainian President wanted to salute their efforts in favor of Ukrainian refugees. “They inspire the world“, according to Volodymyr Zelensky.

The Hollywood star couple launched a GoFundMe campaign to help refugees and humanitarian aid in war-torn Ukraine, where Mila was born before moving to the United States as a child.

So far, they’ve managed to raise nearly $35 million, while pledging $3 million of their own money.

Zelensky shared a photo of himself during the virtual call with the couple and wrote in a post on Twitter: “They were among the first to respond to our grief. They have already raised $35 million. Grateful for their support. Impressed by their determination. They inspire the whole world.“

Ashton and Mila thanked the many donors after exceeding their goal. “We just wanted to say that we achieved our goal. Over $30 million has been raised. You were more than 65,000 to donate. We are overwhelmed with gratitude for your support“, they said.

Ashton then added: “Our work is not finished. We are going to ensure that the outpouring of love you all have shown through this campaign has the maximum impact on those in need. He continued: “As funds continue to come in, we will treat every dollar as if it were given out of pocket. With respect and honor for the work that earned it, with the loving intention by which it was given, and the desire that it be maximized with positive results for others.”

Mila added: “We want to once again thank you for your continued support, please don’t stop donating, either to us or to other foundations. This is just the beginning of a very , very, very, very long trip“.

The Bad Moms actress previously urged the world not to regard the Russian people “as the enemy”.