Vania Bludau He caught the attention of his Instagram followers after he confirmed that he gave himself a chance in love again, months after his controversial break with the reality boy Mario Irivarren.

“Bella Vanya, are you in love?” one of his followers asked the model, who responded with a photograph where his shadow and that of a man are seen, he also wrote: “100%”.

On the other hand, Bludau confirmed that he left Peru after his treatment to freeze eggs. “I have not lived full time in Peru since 2015, this time I was in Lima for the treatment I received. I don’t know when I’ll be back again.”

Likewise, the Peruvian model was happy because she is doing very well in her process of freezing eggs. “It went super well, I’m really happy with this decision and really if possible I’ll do another stimulation to freeze more”, explained. “I think it depends a lot on each patient, in my case they had to put the rejuvchip on me,” added.

Weeks ago, through her social networks, the model revealed that she would return to Lima to start the freezing process.

“Many women live planning their lives by looking at the biological clock. I confess I was one of them, likewise I knew how to think twice before wanting to get pregnant just because of the famous phrase: ‘You’re going to miss the train’”, He began by saying Vania in some videos that he shared on his Instagram story.

“I am 32 years old and I do not feel that any train is passing me, I live my life fully and on my time. I want to be a mom one day, although for now the idea of ​​being an aunt makes me happy.” added the model. 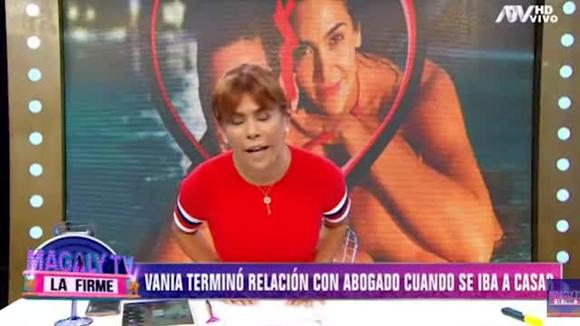 Magaly Medina reveals why Vania Bludau would have ended up with Frank Dello Russo.